W.R.C. – The Official Auxiliary to the Grand Army of the Republic

The Woman’s Relief Corp, founded in the late 1870s in New England, quickly became a national organization, and eventually the official auxiliary to the Grand Army of the Republic. Unlike the other organizations surrounding the G.A.R., this one did not have the requirement of a blood connection to a Civil War veteran. Instead, the requirements were a patriotic spirit and belief in the values of the Union and the soldiers and sailors who had defended it. Since this made women who were not directly related to a veteran eligible, the organization was a popular choice, and it could include a wide range of ages.

The role of the Woman’s Relief Corp expanded over time, and they became an active club, both for patriotic activities and for the benefit of the aging veterans. Across the country, the W.R.C. assumed a position as the social organizers for the veterans and their families. They hosted dinners and other social events.

In many cities, including Pasadena, the Woman’s Relief Corp became concerned with taking care of the veterans as they grew older. They maintained visiting committees to drop in on the ones who had no local family members to make sure they were doing well. When a G.A.R. man needed financial or medical assistance, the W.R.C. helped. Like the G.A.R., the W.R.C. even bought funeral plots. This allowed their members to be buried together, and at a lower cost, but it also allowed them to handle the burial of deserving others. In Pasadena, one of those was a woman who had served as a nurse during the Civil War. The W.R.C. wanted it remembered that women had contributed to the war effort, and the group made an effort to mark the graves of nurses (as well as those of soldiers) on Memorial Day. 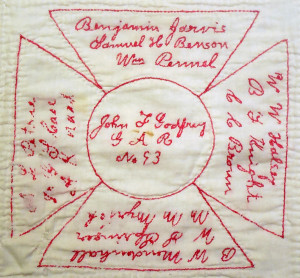 Detail of redwork commemorative W.R.C. quilt, circa 1900 (Courtesy of Linn and Jean Hoadley)

They raised money through dues, fundraisers, benefit events, and donations. One of the things they did as a fundraiser was to make quilts. This could be done in a variety of ways, but the simplest was to request a donation for each square of the quilt. The final product would be stitched and assembled by a group of the W.R.C. women. Here in Pasadena, their “Thimble Club” would gather at the home of one of their members and work on these projects.

In the exhibit, we have a fine example of this kind of quilt. Based on evidence from the names mentioned in the squares, along with newspaper mentions of their work, this quilt, with red thread work, was probably put together in the 1920s. Some of the money came from local donors, but one square suggests that the women reached out to everyone they knew, around the world. Some squares have names of women on a local block, but one features a town in England. Some squares honor local veterans, others just mention the donors by name.

Sadly, the Woman’s Relief Corp lost much of its focus and direction after the last G.A.R. veteran was gone. Now, the organization has perhaps 2,000 members, compared to a peak of 100,000 women. They do still exist, and they participated in the 150th anniversary of the burial of Abraham Lincoln on May 3rd of this year. They were the only one of the Allied Orders (the organizations affiliated with or descended from the G.A.R.) whose leadership chose not to participate in the 2012 event in Los Angeles celebrating the National Encampment of 1912.