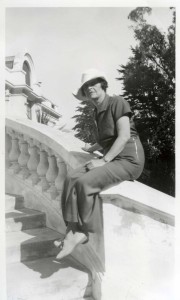 Leonora Scott Curtin, perched on the railing of the grand staircase at the Fenyes Mansion, 1936 (Fenyes-Curtin-Paloheimo Papers, 102.4)

As common as pants are in our wardrobes today, it was scandalous for women to appear in them just over 100 years ago. The trend toward trousers began during the early 1900s, when French designer Paul Poiret (1879-1944) in 1911 became one of the first to design pants for women based on loose-fitting harem costumes. Women who wore these outrageously fashionable outfits shocked their families and friends!

As men went off to fight in World War I and women took their places in the work force, trousers and overalls became the practical and preferred mode of dress. When the war ended, women were reluctant to give up the freedom of movement afforded by pants. Designers responded by creating feminine, stylish trousers for day and evening that became popular with the avant-garde fashionistas of the 1920s. Coco Chanel (1883-1971) created chic “beach pyjamas” in jersey for her Deauville resort shop.

Although initially designed for sports, trousers strode onto the fashion scene with aplomb in the 1930s and 1940s. Movie stars such as Marlene Dietrich (1901-1992) and Katherine Hepburn (1909-2003) wore trousers without apology.

So why are there no trousers or pants in our Fabulous Fashion exhibit? Well, unfortunately the Museum has not yet been the recipient of any that represent those decades. Perhaps you…or someone you know…will be the first to donate a fabulous garment to our collection. We’ll be waiting to hear from you. 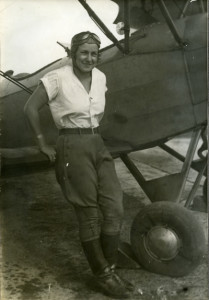