There is a clichéd image of Confederates going west after the war, of gunfighters and bounty hunters, outlaws and ranchers, all escaping poverty and ruin. In actuality, the Confederates who came to Pasadena mostly came here for their health or for business, or both, and were fairly well off. Here are two examples: 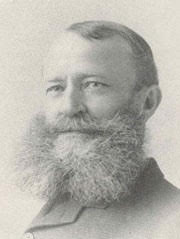 Presley Baker was a Kentuckian by birth, but chose to side with the Confederacy even though his home state did not secede. He crossed over the border into Tennessee and became an artillery officer, serving as a lieutenant with a unit mentioned in documents as “White’s battery of horse artillery.” Unfortunately, little information about that unit survives. It was probably the unit commanded by Benjamin F. White, Jr., and if so it was made up of several six-pound cannons and their crews, and attached to the cavalry command of General Joseph Wheeler. Baker was probably second or third in rank in the unit.

His postwar profession was listed as attorney, and he did well financially but his health was poor. By the time he came to Pasadena he was wealthy enough to build a large home on Orange Grove, one of the “named” mansions of Pasadena. He called his home Sunnycrest, and his widow Clara remained there and remarried after his death in 1893. The man she remarried was a Union army veteran, Robert Burdette.

He was often referred to as “Colonel” Baker, but the traditions of Kentucky often led to any wealthy officer or businessman being called a Colonel (and no, Colonel Sanders was not a regimental officer in the war against chickens…)

Thomas Jefferson Martin joined a cavalry unit in Texas while still in his mid-teens, and spent the last half of the war in the Confederate army in Texas. He came out of the war intact, but his health was ruined during his postwar years as he made money as a rancher, miner, and storekeeper. He came to Pasadena on doctor’s orders for his health, and he immediately did well as a land investor. Pasadena was known for its boom-and-bust land price swings, and this led to something unusual.

During these swings, men bought land via private loans, in which the seller would take payment over time. Just as in recent years, if the value of the land then took a sharp dive, the result would be that the buyer owed more than the value of the land. Some sellers would then sue the buyers if they failed to keep up payment, which could ruin the buyer for years.

At some point in one of these swings, T. J. Martin apparently took a substantial loss on some of these deals, forgiving the loans he had made to the buyers. Since this immediately preceded him being taken into the social and business circles of the local Union army veterans, the best local guess is that at least some of the forgiven loans had been made to members of the local G.A.R. post. He began to attend the local Memorial Day events with the Union veterans, one of the few local Confederates to do so. 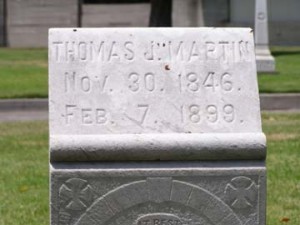 Martin still had enough money to buy a business, and he became a grocer with a store near Fair Oaks and Colorado. His business was one of the ones that put up a few dollars to help finance a new organization called the Tournament of Roses.

When Thomas Jefferson Martin died, he had unique honor of being given a funeral by the Godfrey Post, Grand Army of the Republic, with mixed Union and Confederate pallbearers.