Thomas Croft: The Man Who Owned Pasadena for a Day 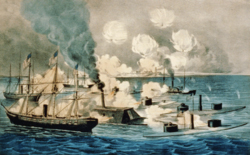 Thomas Croft was an organized man. That served him well during his time in the Union Navy during the Civil War. He was an officer, and he served as paymaster on board a Monitor-class ship in the fighting around Mobile Bay. This then-new class of ship, based on the famous Monitor, was an armored, turreted vessel designed for fighting fortifications and other ships. It was low to the water, hard to hit, and had a small number of very large cannons on board. In battle, part of Croft’s assignment would have been to carry any messages from the captain to the gun crews. In those pre-electronic days, only a voice tube connected the captain’s post to the gun turrets, and that was unreliable in combat. Unfortunately, in those pre-ear protection days, the men serving those enclosed guns often suffered varying amounts of hearing loss. This was true of Thomas Croft, who eventually lost much of his hearing.

Map of the San Gabriel Orange Grove Association showing the original division of lands along Orange Grove Avenue, 1874. This copy was made by the City Engineer S.J. Van Ornum (Map Collection 1-2-10)

A few years after the war, Croft became part of a business venture to buy land in California. His personality and paymaster experience left him as the one trusted to handle the money and the financial paperwork. The group wanted to buy enough land to create an agricultural community. Croft came west and began negotiations with Benjamin Wilson and John Griffin to buy enough land for their project, but the group didn’t have quite enough money to make the purchase. So, Croft talked former Colonel Jabez Banbury into joining the group, as well as ex-Confederate Aurelius Hutton. Their extra money was enough to put the deal on track.

Because of the nature of real estate law, and the vague business arrangements involved, the entire piece of property was signed over to the individual making the deal, and the sellers left it up to Croft to straighten things out at the receiving end. Thus, for roughly a day, Thomas Croft owned all of what would become Pasadena.

Once the rest of the group came west, they divided up the land and laid out the first roads. Their meeting to divide the land was held on a rise just west of where Pasadena Museum of History stands today.

Croft chose a piece of land at what is now the corner of California and Orange Grove, and he is credited with being the first one in the colony to begin the process of planting. The group would soon plant many fruit trees and grapevines. 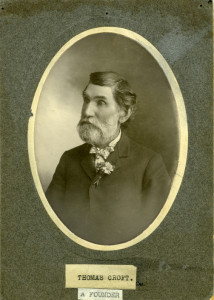 Within a year, Croft helped found the local Presbyterian church, becoming one of the trustees. Mrs. Croft apparently thought that their new home was a little drab, and she felt homesick. So, Croft planted a garden of roses, the flower for which Pasadena would soon become famous. His may have been the first such garden on south Orange Grove, a short walk from where the Tournament of Roses headquarters now stands.

He invested in various businesses, including the Pasadena Packing Company, which shipped fruit from this area to other parts of the country.

The rest of the Croft story isn’t as happy. His hearing loss garbled the stories he told of his past, so that even the newspaper articles mentioning him had facts wrong. Some listed him as having served on the Monitor, rather than a Monitor-class ship, and lauded him for his battle experience, but listed him in the wrong battles.

Near the end of his life, Croft displayed signs of what might today be called a form of dementia, perhaps Alzheimer’s. As a result, he was ordered to be housed at Patton Asylum in 1910, but he died at his home before he could be sent there.