Summer 2017 Edition of the Collections Quarterly 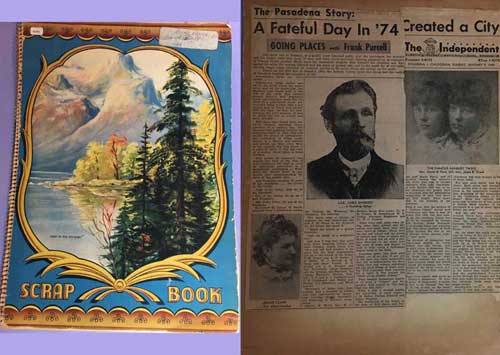 In 1949, as California was celebrating its centennial, Pasadena’s Indiana Colony was turning 75. That year, The Independent featured a series, “The Pasadena Story,” in which Frank Purcell gave a bird’s eye-view of the San Gabriel Valley’s historic growth as part of the celebration of Pasadena’s 75th anniversary. Purcell gave a wonderful account of the area’s history and covered a lot of ground in this four-part series – beginning with the story of the Native Americans of the San Gabriel Valley, to the arrival of the Spaniards, to the boom years of 1880s, to the contemporary times when he was writing the stories. He wrote these stories as part of his column “Going places with Frank Purcell.” He also wrote about the founders of Pasadena and the places and events that defined Pasadena in the nineteenth century. There are some really interesting stories about how Eagle Rock got its name and Pasadena’s Whiskey Revolt during its “dry years.” All these fascinating stories are saved in a scrapbook in our Archives and can be viewed anytime during our regular business hours, Thursday to Sunday from 1:00 to 4:00 pm.

The Mount Lowe Railway will forever remain one of the area’s most popular tourist attractions. Although it has been closed for nearly eighty years, people still hike (or drive) up to explore its ruins. And PMH’s Research Library and Archives receives requests to view our Mount Lowe special collection. One highlight of the collection is a 35″ long replica of Ye Alpine Tavern. The model was donated by the L.A. Chamber of Commerce and was purportedly made by A.H. Koch. There is an Adolph H. Koch (1891-1981) listed in the Pasadena Directories. However, his profession is not listed and we have no way of knowing if he was the A.H. Koch who made the model.

Ye Alpine Tavern, known as the Mount Lowe Tavern in later years, was built in conjunction with the opening of the Alpine Division of the railway. Both were formally opened at the end of 1895. The hotel, which was expanded in the 1920s, was a popular attraction until it succumbed to a fire in 1936. 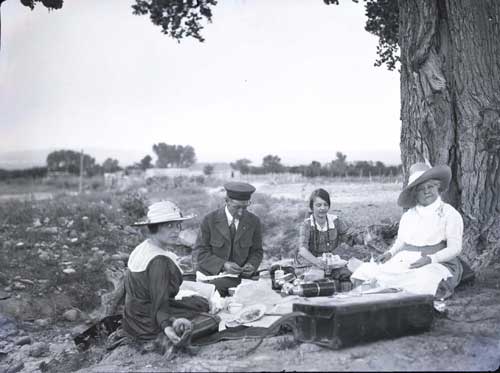 On August 2, 1918, an unidentified photographer, perhaps Adalbert Fenyes, snapped this picture of his family enjoying a summertime picnic near Santa Clara Pueblo, New Mexico. From left to right are Leonora Curtin, the family chauffeur in full livery, Leonora or Babsie as she was often called, and Eva Fenyes. They are sitting under “our picnic tree” as described by Eva on one of the sketches she made that August. We might imagine several mornings when they packed a picnic, drove out to the pueblo where Eva sketched and the others explored, and then returned each noon to this shady spot for lunch. Also under the picnic tree, in the foreground of this photo, is an artifact recently discovered in the basement of the Fenyes Mansion. Lizzie Steidel, our summer collections intern, not only unearthed the large leather picnic trunk, she also identified its image in this recently scanned photograph. By confirming its provenance, Lizzie can now add and catalog her find in the museum’s Fenyes-Curtin-Paloheimo Collection database. Great sleuthing, Lizzie! 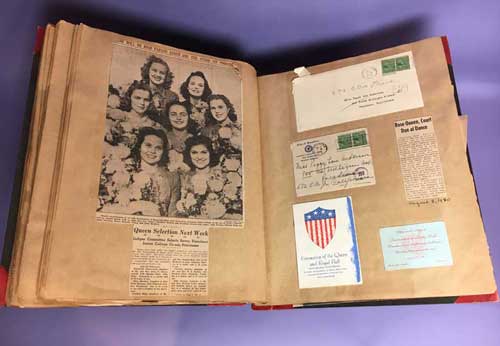 One of the charming traditions practiced by the Rose Queen® and Princesses of the Tournament of Roses® is the keeping of scrapbooks. Since at least 1930, the Tournament has given the members of the court embossed scrapbooks to fill with keepsakes and memories of their Royal year. Princess Margaret Anderson (nee Feldmeier) of the 1939 court recently donated her two scrapbooks to the Archives. Filled with newspaper clippings, programs, faded ribbons, and fan mail, the scrapbooks provide a glimpse into a magical year.