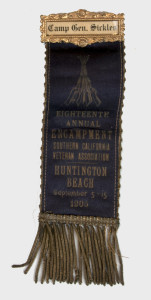 The local Civil War veterans, especially the Union Army veterans, tended to socialize together both locally and on “road trips.” Some were to reunions at Gettysburg, or state and national meetings of the G.A.R., but others were just for fun.

Many of the local events involved a separate organization known as the Southern California Veterans’ Association. Unlike the G.A.R., this organization was open to veterans of other wars and even Confederates, and it was created for the purpose of socializing. These were purely social events, with lots of wartime story-swapping and even Civil War-related entertainment. Each year, the men would get together for several days at a camp facility, usually along the coast so that they and their families could enjoy the beach. Typically, the families of the Godfrey Post were responsible for the entertainment on one day or evening, and these included music, poetry, dramatic readings or whatever else they could come up with. The local newspapers gave these events serious coverage, as it was a matter of community pride.

Here is an excerpt from an article about the 1898 event in Long Beach, from the Pasadena Daily News of September 9, 1898:

“The editor of the News went down last evening and enjoyed the occasion with the rest of them. In anticipation of the splendid program the people gathered in the great Tabernacle by the hundreds an hour ahead of time. When Mr. and Mrs. Henry Thompson appeared on the stage a wave of enthusiasm passed over the vast assemblage, and the old veterans broke out with “John Brown’s Body,” etc., in honor of the daughter of the old hero liberator. Twice during the program the audience requested Dr. Reid to introduce Mrs. Ruth Brown Thompson and she responded graciously to the desire. When Mr. and Mrs. Thompson were introduced to N. S. Blackstock and J. H. McCutcheon of Ventura, two ex-Confederates, it seemed like a stirring tableau Dr. Reid was presenting on the stage.”

Dr. Reid, local physician and historian, is highlighted in the current exhibit. Until his death, he was very much a part of the local veteran community and was the person who first documented the veteran graves at Mountain View Cemetery, whether Civil War or veterans of other conflicts.

Henry Thompson and Ruth Brown Thompson were beloved by the local community until their deaths, and their presence at this event was not surprising.

N.S. Blackstock was a Confederate cavalryman who moved from Ventura to Los Angeles after the date of this event.

J. H. McCutcheon, who was described by the Los Angeles Herald as being “an old Confederate from McCutcheon Springs, near Santa Paula,” was part of a very touching historical moment a few years later. At the battle of Gettysburg, in 1863, he had picked up a portfolio of papers from a wounded Union soldier, thinking they might be military documents. They turned out to be love letters sent to the soldier, E. E. Moore of the 2nd Wisconsin, who recovered and was puzzled by the loss. He went home and later married his Bertha. In 1909, Mr. McCutcheon finally found Bertha and was able to give the letters back to her. Private Moore had since died and she had remarried, but she was still thrilled to have them.