Statue in the Park 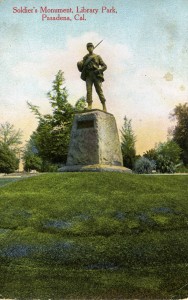 “Dear Sir: As per your instructions received from H. H. Kitson, sculptor, Boston, Mass., we have this day shipped to you as per enclosed receipt one bronze statue of Volunteer Soldier. Could we ask you to kindly acknowledge receipt of this letter and also to telegraph us at our expense immediately when the statue reaches Pasadena?

“Thanking you in advance for your courtesy, we are,

This letter was the result of months of work, planning, and fundraising by local citizens, including a committee made up mostly of local G.A.R. members. In addition to John McDonald, ex-drummer boy of the 110th Pennsylvania, the committee included former governor Henry Harrison Markham (32nd Wisconsin), Dr. Gideon Case (105th Ohio), and A. K. Nash (95th Illinois), whose department store lasted until modern times. The committee was still raising money from the community on the date the letter was received. It is possible that the committee members paid for the statue and got reimbursed as the money came in, as the committee members included several men of financial means.

The statue would be mounted on a pedestal of granite (which also had to be shipped in, as California granite was deemed unacceptable), on a knoll in what was then called Library Park. The inscription on the base would read: “Erected By The Citizens of Pasadena To Perpetuate The Memory Of The Defenders Of The Union ’61 to ‘65.”

Once the library moved to its modern location a few blocks away, the park would come to be known as Memorial Park because of the statue. The sculptor, Henry Hudson Kitson, was born in England and emigrated to the United States in the 1870s. His wife, Theo Alice Ruggles Kitson, also became a sculptor and often worked with her husband on statues and monuments. Because this piece was created during the years they worked together, it is possible that she worked on it as well. H. H. Kitson became well-known for his Civil War statues, and at least ten of his pieces stand as monuments at the Vicksburg National Military Park. Pasadena wanted only the finest quality. 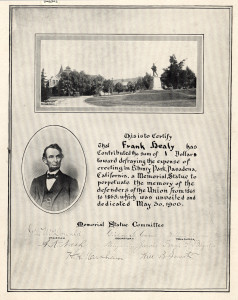 Even though the statue was to be placed in a public park, the money was raised privately. Those pledging money got certificates to show that they had contributed to the effort. After the statue was installed, many gatherings of Civil War veterans occurred in its shadow. The biggest of these took place in 1912, when the Grand Army of the Republic’s national encampment took place in Los Angeles. As a side excursion, these veterans had a Pasadena Day, during which they came up by trolley car and had a gathering in Library Park, filling the park with soldiers now in their sixties, seventies, and eighties. The statue, then only a few years old, had a place of honor at the events.

When the Pasadena Central Library moved to a newer building in 1927, the City of Pasadena turned the old building over to the G.A.R. for use as a patriotic hall. Thus, the statue was just outside their meeting place for several years until the building was seriously damaged in an earthquake. The statue stood through that same quake unscathed.

Today, the statue is only one of several monuments to war and tribulations that stand in Memorial Park. Memorial Day is still celebrated on the park grounds, with an odd blend of solemnity and barbecue as flag ceremonies and aircraft flyovers are followed by lots of eating. Still, the statue came first, and beginning on Memorial Day of 1906, it was celebrated as a reminder of the sacrifices made by the young soldiers who fought from 1861 to 1865.