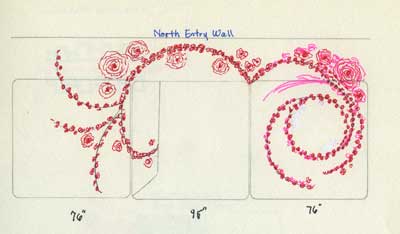 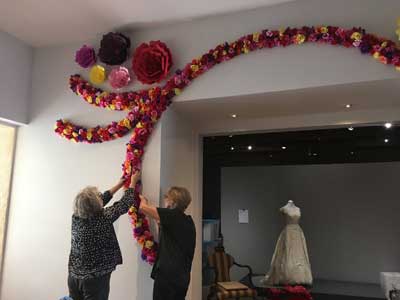 As a member of the curatorial team for the Royals of Pasadena exhibit, I was called upon to imagine what might be created in the entry hall that would evoke the spirit and beauty of the annual event called the Tournament of Roses.

By the time I sat down one morning to focus on what this installation might be, the exhibit committee had already discussed preliminary ideas for the galleries. One of those ideas was to construct a parade float or at least a portion of a float that would be the platform on which mannequins dressed in the Queen and Princess dresses would be displayed. As I began to sketch ideas, I had this concept in mind.

Through my sketches, I was beginning to see how this installation could show the spirit of celebration and joy that everyone feels while either attending the Rose Parade or watching it on television. As undulating lines appeared on paper, I imagined these lines of roses representing the flowers on the parade floats. Later, when I saw gowns on exhibit, I realized the curved lines of roses could also represent the flow and graceful movement of the beautiful gowns worn by the royal court. 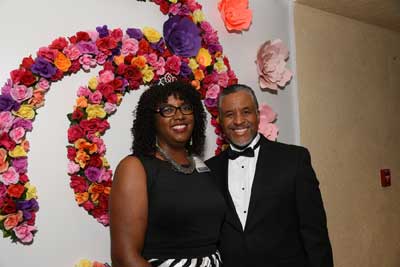 The initial concept focused on using only red roses but when the seasonal supply of red roses diminished, the choice was made to use a variety of colors. This resulted in a scene more pleasing to the eye than solid red roses. Going a step further, I think the beautiful colors might be interpreted to represent the variations in personality and ethnicity of past Rose Queens.

I have been asked if the circle of roses is a symbol for something.  There is no hidden meaning to the circle of roses. Although, if you look at one of the photos on the entry wall of the south gallery you will see a Rose Queen from the past holding a circle of roses that looks like the one hanging in the entry. Was this a case of serendipity or the “Rose Muse”?

I hope all those that visit the exhibit enjoy the “Royal Rose Hall” installation and will take the opportunity to share it with friends on social media. Taking photos with the roses would be another way to spread the spirit and beauty of the exhibit as well as that of Pasadena Museum of History.