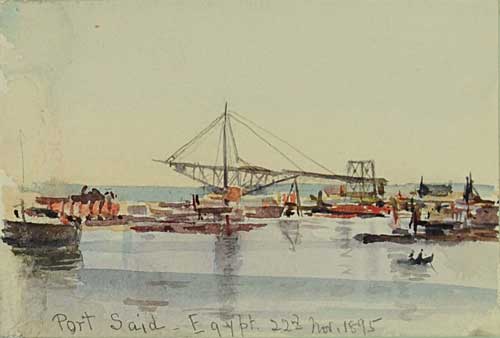 Looking for something a little different to read this summer? Well, Lizzie Steidel, Pasadena Museum of History’s Collections Intern, is sorting and cataloging hundreds of artifacts stored in the Fenyes Mansion basement, and last week she found dozens of books variously inscribed as belonging to Eva Fenyes, Leonora Curtin, or Leonora Paloheimo. All are softcover and written in a variety of languages – French, Spanish, Italian, German, and English. One might guess that at least some of them were purchased and read on family vacations in Paris, Rome, or Mexico City.

As Lizzie boxed dozens of these paperback books, she came across a novel in two volumes that she thought was especially interesting. Each volume is inscribed with “Muse” on the front cover and stamped inside with the mark of J. Horn English Stationery & Book Sellers Store, Port Said, Egypt. We know from Eva’s watercolors that she was in Port Said on November 22, 1895. At the time she was divorced but still Mrs. Muse. She would not become Mrs. Fenyes until April the next year when she again passed through Port Said on her way to Budapest to marry Adalbert Fenyes her fiancé whom she had met in Egypt. 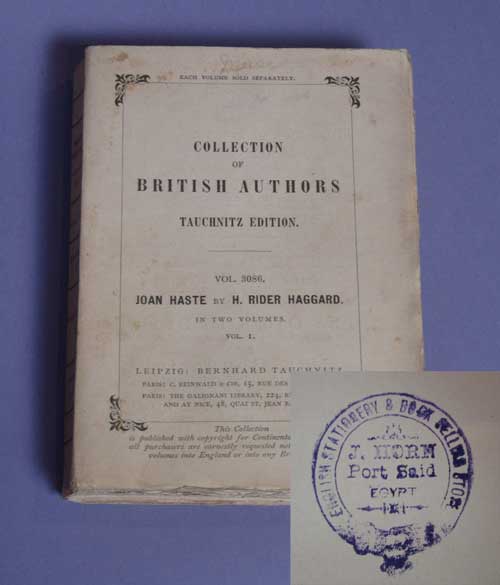 The novel Eva chose to read during this period of courtship and engagement was Joan Haste, a meandering Victorian tale of love, marriage, scandal, and financial intrigue. The author, H. Rider Haggard, was known for his Allan Quartermain Series which had debuted years before with King Solomon’s Mines. His newly published title was a departure from these swashbuckling adventure stories, but Joan Haste was reviewed and lauded by the Los Angeles Times in May 1895 as “one of the most interesting that ever emanated from his pen.”

If you would like to give it a try, you can read the complete novel online: