The Art of Getting There: Railroad Inspired Artistry

Steve Crise, co-curator of the exhibition The Art of Getting There: Railroad Inspired Artistry (on view March 29 – August 13, 2017) describes a selection of artwork inspired by the rails.

“Diesels for the Upgrade” by Edmund Lewandowski 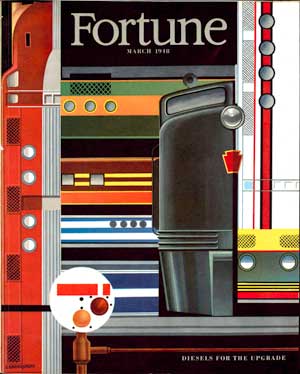 This striking work illustrates the concerted effort by American Railroads to upgrade their fleet of steam locomotive to the new sleek design offered by the smooth and streamlined diesel locomotives. Edmund Lewandowski created murals, advertising pieces for many industrial clientele, and a large body of covers for both Time and Fortune magazines. His uniquely Precisionist style of painting was his trademark and is found in both his personal work and his commissioned pieces. 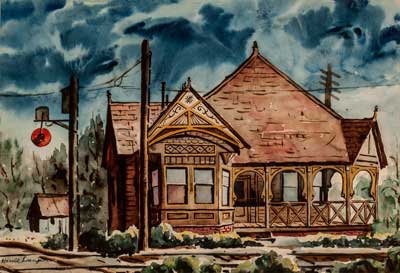 A forlorn Victorian-era house sits just feet away from a wig-wag controlled crossing along Pacific Electric’s Venice Short Line. Folks came to the beach on the PE from four different counties; San Bernardino, Riverside, Orange and Los Angeles on nearly 1,100 miles of track during its heyday. Lanfair was an illustrator, designer and painter from Portland, Oregon. He studied at the Los Angeles School of Art and Design, Nicholas Haz School, Otis Art Institute, and the Huntington School in Cleveland, Ohio. Exhibitions include the Cleveland Museum in 1932, the Zeitlin Gallery in Los Angeles, also in 1932, as well as SFMA, WWAA and AAW from the 40’s to the late 50’s. Lanfair was also an illustrator and designer for Hollywood movie studios from 1930 – 1945. 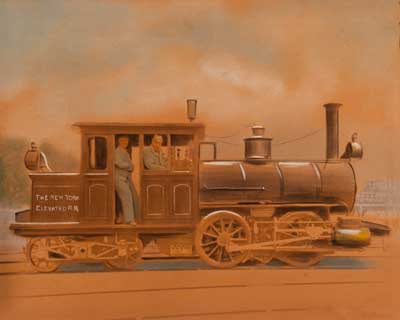 This pastel-enhanced photograph was an early answer to the lack of color photography, created by an unknown photographer. The names of the two men in the cab are lost to time, but the folks of New York had been trying to put a successful elevated railway in their state since the mid-1850’s. Several iterations began and failed, thus leading to the incorporation of this company in 1872. This was the first attempt anywhere to build an elevated rapid transit line, under the control of Jay Gould, (think Cornelius Vanderbilt nemesis and Union Pacific Railroad) and capitalized at ten million dollars. This image, probably dating from the mid-1880’s, is displayed in the original frame. 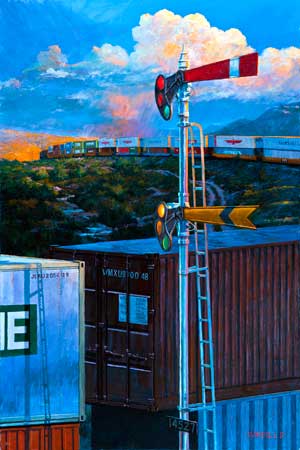 At the time this work was commissioned, the use of semaphore signals on American railroads had almost totally vanished. The example seen here, a Union Switch & Signal Style “B” semaphore was among the oldest type of signaling still operating on North American railroads. The Victorian era Style “B” signal and the modern Southern Pacific freight train hauling its endless load of containers through the deserts of New Mexico represent over 100 years of railroad technical advancements. John Winfield is a nationally recognized railroad artist. He has created many works for those in the railroad industry, as well as book covers and works for private collectors. John is still very busy with his painting and commissions and frequents railroad shows and conventions throughout the country. You can see more of his work at www.winfiledart.com.