This Round’s on the Collections Manager 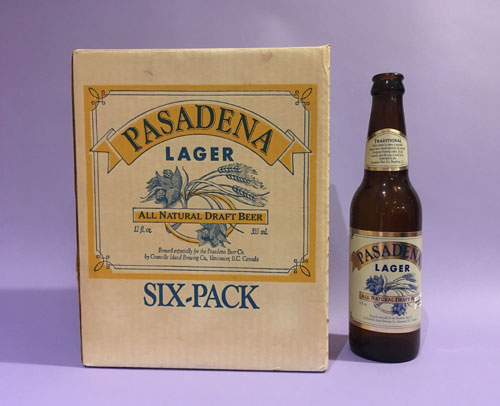 A six-pack has been sitting on the corner of my desk for a week and a half. (And no, I wasn’t fired. Granted, I wasn’t promoted either, but that’s beside the point.) The beer bottles are empty and rather dusty.  They were brought in by a potential donor who thought they may be worth a bit more than the ten cents he’d get at the recycle center. The beer is Pasadena Lager. It is labeled “Brewed especially for the Pasadena Beer Co. by Granville Island Brewing Co., Vancouver, B.C. Canada.”

So I went back to the donor. Before, he couldn’t offer me a date as to when he purchased and consumed the beer. However, I asked again, “Please, just guess a decade. At least that will give me a place to start.” He guesses the early 1980s. Well, that’s been my problem all along – the 1980s.  The beer bottles are only 30+ years old (which, being roughly the same age as myself, means that they are not old). I’m a historian. I’m used to researching old artifacts. Many of my resources don’t go past the mid-1970s, if they even go that far. So, it’s back to the younger, sexier research tool – Google. This time one of our Archives volunteers, Susan Beeler Anderson, finds something. It’s a Los Angeles Times article from 1987 that discusses the revitalization of Old Pasadena and the new businesses coming in. It mentions Pasadena Lager! The article also discusses a future brewery in Pasadena (that sadly never materialized). However, until said non-existent brewery was built, Pasadena Lager was being produced in Canada. This is definitely it. Finally, I had something.

So, I sent off two emails. One to the brewery in Canada (which began operations in 1984 and is still in existence) to see if they can tell me anything. The other is to the Pasadena Beer Co. owner quoted in the Los Angeles Times article (he has since moved on from beer and now owns a winery in Napa – thanks again, Google). I also downloaded a photo of the beer to my phone to show to a Trader Joe’s employee when I did my grocery shopping that weekend. (After you live in Pasadena long enough, you can start to look at products and just tell when it’s Trader Joe’s merchandise. And whenever I looked at Pasadena Lager, my Trader Joe’s sense was tingling.) My hunch paid off – a Trader Joe’s employee (who, incidentally, began working at the store in 1984!) remembered that they sold the beer. However, he’ll have to check with “the office” to see if they have any information they can give me. Hopefully, I will hear back soon. I have heard back from the brewery in Canada. While they have no records on Pasadena Lager and there is no longer anyone at the company who worked there in the 1980s (ok, now I’m feeling like the bottles and myself may be edging toward old), the packaging does match the lagers that they produced from 1984 to roughly 1989. Local history librarian Dan McLaughlin has also found something – Pasadena Beer Co. is listed in a 1988 Yellow Pages under beer distributors. The company was located at 33 E. Colorado Boulevard. I’m still waiting to hear from the former Pasadena brewery owner. Although now that he is enjoying fermented grapes in Napa, he may not want to relive the hops history of the 1980s.  But I’m still happy.  While we don’t know everything, we do know some of the history of the short-lived Pasadena Lager.

So the next time that you’re enjoying a local brew, if you decide to put the bottles in the back of your garage for future donation to your local history museum, please – for the love of your local Collections Manager – stick a note in the bottle with the date and where you bought the beer. We’ll appreciate the provenance.