A Stink in West Pasadena 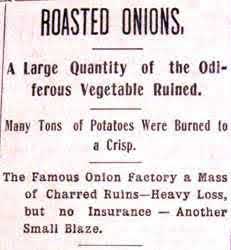 For many in West Pasadena, a reason to celebrate arrived a few days before the Fourth of July in 1899. Shortly after 9 p.m. on June 30, “residents of the west side really enjoyed a rather expensive illumination,” according to the Pasadena Daily Evening Star.

In less than a half hour, a two story wood building on Bradford Street near Grand Avenue was destroyed by a fire of unknown origin.  Hundreds rushed to see the fire, which eliminated “a source of much annoyance to the residents of Orange Grove avenue.”

For nine years, the “onion factory,” as it was popularly known, emitted a powerful odor that pervaded west side homes and was “present at all meals” during the drying season in summer. The business was actually named the “Condensed Vegetable Company” – “manufacturers of condensed vegetables and evaporated fruit.”  The Pasadena Daily News noted that “this fashionable residence district has not endured the presence of the factory, where tons of onions threw off their lusty aroma, without protest, but the effort to have it abated as a nuisance was not successful.” 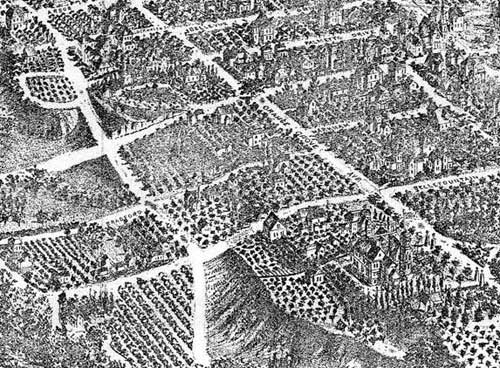 A close-up view of a lithograph of Pasadena in 1895 shows the area of Bradford Street and Grand near the center. The nearest fire hydrant was nearly two thousand feet away, and the News reported that the fire “had its own way” before the fire department was able to make the connection.

At the time of the fire there were about eight tons of onions in the building, and eight to ten tons of potatoes. “That they were roasted to a finish, there can be not the slightest doubt,” the Star reported, “with the dying aroma of the succulent vegetable still hanging on as if loath to desert the neighborhood in which it had heretofore caused so much annoyance.”

After the fire was nearly over, the owner, D.G. Baker, remarked “I suppose now the people on Orange Grove avenue are satisfied.”  Undoubtedly they were. They would not have to suffer the next round of onion drying, which had been planned to occur about a month away. The Daily News printed a joke the next day.  “It is not true that the tony Orange Grove avenue residents are making up subscriptions today to start a new onion factory.”

This article was originally published in the Fall 2012 issue of West Pasadena Residents’ Association’s The News.