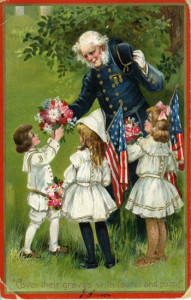 “Cover their graves with laurel and palm.” In this postcard, an old soldier shares Memorial Day with a new generation.

In May of 1865 in Charleston, South Carolina, the African American community decorated the graves of Union soldiers who had died while in a Confederate prisoner of war camp.

In April of 1866, the women of Columbus, Mississippi decorated the graves of both Union and Confederate soldiers interred there.

Many other small, local celebrations were held, on a variety of dates, but mostly in April or May. By then, flowers were easily available in most places.

In May of 1868, General John Logan, commander of the Grand Army of the Republic issued orders to the members of the G.A.R.:

Headquarters, Grand Army of the Republic

We are organized, comrades, as our regulations tell us, for the purpose, among other things, “of preserving and strengthening those kind and fraternal feelings which have bound together the soldiers, sailors, and marines who united to suppress the late rebellion.” What can aid more to assure this result than by cherishing tenderly the memory of our heroic dead, who made their breasts a barricade between our country and its foes? Their soldier lives were the reveille of freedom to a race in chains, and their death a tattoo of rebellious tyranny in arms. We should guard their graves with sacred vigilance. All that the consecrated wealth and taste of the Nation can add to their adornment and security is but a fitting tribute to the memory of her slain defenders. Let no wanton foot tread rudely on such hallowed grounds. Let pleasant paths invite the coming and going of reverent visitors and fond mourners. Let no vandalism of avarice or neglect, no ravages of time, testify to the present or to the coming generations that we have forgotten, as a people, the cost of free and undivided republic.

If other eyes grow dull and other hands slack, and other hearts cold in the solemn trust, ours shall keep it well as long as the light and warmth of life remain in us. 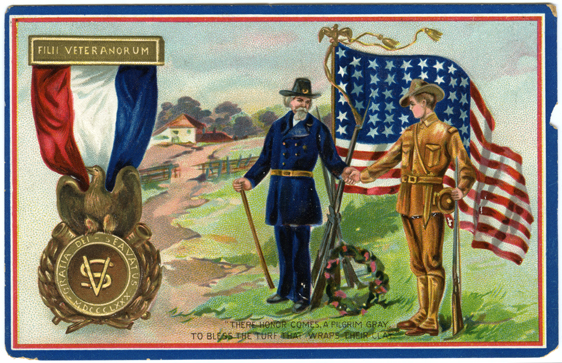 “There honor comes, a pilgrim gray / To bless the turf that wraps their clay.” This Memorial Day postcard comes from the Sons of Veterans (now called Sons of Union Veterans of the Civil War)

Let us, then, at the time appointed, gather around their sacred remains and garland the passionless mounds above them with choicest flowers of springtime; let us raise above them the dear old flag they saved from dishonor; let us in this solemn presence renew our pledges to aid and assist those whom they have left among us as sacred charges upon the Nation’s gratitude,–the soldier’s and sailor’s widow and orphan.

III. Department commanders will use every effort to make this order effective.

183 GAR Posts answered his call that first year, with over 300 holding memorial services the following year. The practice spread as the surviving veterans moved westward and into new lives, and as more cemeteries came to hold the soldiers who passed away after the war.

You may notice that General Logan didn’t actually give this event a name. Taking a phrase from his order, it was often called Decoration Day, although people began to call it Memorial Day by the 1880s. The two terms were used interchangeably for many years.

In Pasadena, the first documented celebration was in 1886, a few months after the Godfrey Post of the G.A.R. was formed.

Graves of Civil War veterans and veterans of other wars to be honored and decorated with flags and flowers. There will also be a program telling some of the stories of the Union and Confederate veterans buried at Mountain View.