Portrait of an Artist: How Research Happens (Part 2 of 2) 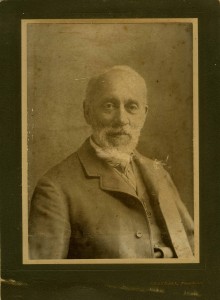 Once I finally dug up Ludwig’s military records, my theory fell apart. Julius Ludwig didn’t enlist until 1864 (not early in the war), and apparently got discharged as soon as he could. There is some indication that he was a bounty jumper who only enlisted because he had been paid to substitute for a draftee. Julius Ludwig was thirty-six in 1864 (thus born around 1828), 5’ 5” in height with blue eyes and a light complexion. Sadly, Julius Ludovici’s passport application, filed after the war, showed him as being born in 1837, 6’2” in height, dark complexion, brown eyes, and with a distinctive chin that would have done Jay Leno proud. So, not the same man after all.

Then, there was a mention in a postwar article that Julius Ludovici had been a member of the prestigious Lafayette Post of the Grand Army of the Republic, a group of veterans in New York City that had given a fancy flagpole to Columbia University in the 1880s. Finally, a solid clue because he would have had to go through a background check to join the G.A.R. there.

The records about the flagpole listed Ludovici, but didn’t say where he had served. There was a published roster book for the Lafayette Post, but not printed until around the time of Ludovici’s death. Unfortunately, no one had digitized it. An online search showed that New York Public Library had a printed copy, deep in their reference section, and it might show something about Julius Ludovici. That would require some sweet-talking, since I couldn’t tell them where to look in the book for what I needed.

Then came the breakthrough. The Sons of Union Veterans of the Civil War have a database that lists where documents about the G.A.R. are housed, and a California member named Dean Enderlin had listed the location of the original, handwritten Lafayette Post roster. It was in the New York State Archives. With a side trip via Ancestry.com, it was possible to look at a digital scan of the pages, and there was Julius Ludovici. He had proven to the G.A.R. that he’d enlisted in the 7th New York Militia on April 26th, 1861, and served for one month. That was how long the militia had been called up for. They went from New York to Washington D.C. and, when their month was up, they took the train back to New York and were disbanded. There is no indication that Julius Ludovici ever served again.

They spent that month in Washington D.C. mostly building fortifications that never got used, even during Confederate raids on the city late in the war. They did their building job fairly well though. Fort Runyon, which is the part that the 7th worked on, was a fort made of earthworks and wood. While the wood fell into disrepair and was scavenged as soon as the war was over, the dirt earthworks were still visible for fifty years. So, they spent their brief enlistment building a fort that could have been used, but wasn’t. They did their patriotic duty, took a month out of their lives, and then went home to be civilians again.

So why didn’t Julius Ludovici show up in the National Parks Service database? It was probably just sloppy record-keeping. No one expected the records of a local militia unit to have any historical importance, and there is also the question of just how many 7th New York Militia units there were. The one that served in April-May of 1861 was called back into service in 1863, but there are a few men on a surviving roster that refers to a 7th New York National Guard unit as well. The major histories of battle units seem to have no information on such a unit, so it may have been a clerical error in naming, or part of a unit that never was fully formed, or misplaced pages from the “real” 7th New York Militia. 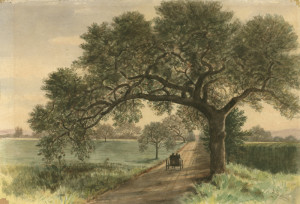 It is entirely possible that Julius Ludovici signed up on a roster page that was later lost. I am still searching historical sources that might provide other clues. Whatever the case, he had enough evidence to convince a group of other veterans that he served for thirty days in a very non-glamorous role, scarcely something that a man would fake. So, we can say with moderate certainty that Julius Ludovici, an artist for a lifetime, spent a month as a soldier.

The search isn’t over, though, so maybe more will turn up. Research is like that.