Portrait of an Artist: How Research Happens (Part 1 of 2)

Several people have asked me how historical research is done, or other questions about the process of learning about the men and women featured in this exhibit. So I thought I would give you an example of such work in progress.

When this exhibit was announced, there were a few local families who came forward and said “My ancestor was in the Civil War. Did you know about him?”

One of the more interesting men who popped up this way was Julius Ludovici. He was a well-known artist from the 1860s until his death in 1907, and his widow and daughter went on to found a local tea room. The odd thing was that most accounts of his life made no mention of any military service, but the family was quite certain he had served. 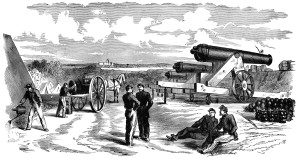 This image of Fort Runyon was from Frank Leslie’s magazine, August of 1861. The fort was manned by other units from New York and New Jersey after the 7th NY Militia went home. The fort was near the site of the modern Pentagon, and the building in the distance is the Capitol building, still under construction at that time. (Courtesy of Nick Smith)

I turned to online sources. The National Parks Service has transcribed the surviving rosters of the vast majority of Civil War units, and they are online in a searchable database. No sign of Julius Ludovici in any of the 7th New York units. In fact, there was no “Julius Ludovici” in any unit in the database of the entire Union army. 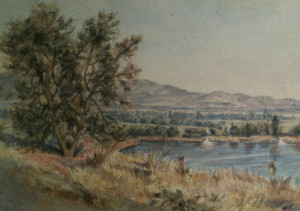 Diving back into the records, I noticed that, even with an Italian name, he had been born in Germany, and that there were other Ludovicis in Germany, including other artists. Looking into records, the German form of the name Ludovici is “Ludwig.” Maybe that was a clue. I looked again at the rosters of New York regiments, and there was a Julius Ludwig, but in the 8th New York Heavy Artillery. Not the 7th? Well, the 7th and 8th New York Heavy Artillery were twin regiments that served together throughout the war, mostly in defenses at Washington D.C., so maybe it was a simple mistake. It seemed like a good solution, and one that would answer a lot of questions. Heavy artillery units were kind of a cushy job compared to being a foot soldier, and a German name (rather than the Italian version) might get you into such a unit. It sounded plausible, and I even mentioned that possibility to several people as I continued to dig. Only, my clever idea wasn’t true. . .