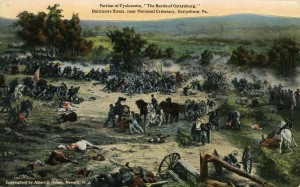 Postcard depicting a portion of the cyclorama, “The Battle of Gettysburg” (Courtesy of Nick Smith)

In central Pennsylvania in early July it’s either as hot as the devil’s front porch or raining barrels, with thunder and lightning to boot. If you’re especially lucky, you get both kinds of weather at the same time. It didn’t seem like the best tourist destination in the world, especially for a man old enough to have seen three generations grow up after him, but for this one time, there was a good reason. The reason was seventy-five years in the past by then. Still, Fayette Nelson was making one more trip to Pennsylvania. He couldn’t miss this one.

It had been hot back then, too, the first three days of July of 1863, and then it had rained on the Fourth. The rain pretty much ended the battle as General Lee and his troops slogged southward through the mud, and the Union army was just too tired to chase after him and fight any more. Thus, the battle was over. A lot of graves had to be dug and filled with bodies in uniform, both blue and gray. A few months later, President Lincoln came up from Washington and said a few words at the dedication of the official cemetery. A little town called Gettysburg had its place in history as the site of the biggest battle ever fought in North America.

That battlefield became not only a famous place, but one almost holy, beginning with Lincoln’s brief speech to open the cemetery built for the soldiers who had fallen at the battle of Gettysburg. So it was that over the years, veterans began to return to the town in July of each year, a gathering not of any one veterans’ organization, but of the veterans overall. For the first few years Confederates were unwelcome, but after an emotional appeal by the widow of Confederate General Pickett, the aging men in gray were gradually welcomed. 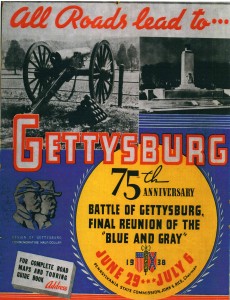 In 1938, it was announced that the 75th anniversary gathering at Gettysburg would be the last of its kind, as it was becoming difficult for the veterans, now in their nineties, to travel across the country. In fact, for that year there was a rule that each veteran would have to travel with a younger relative, in case of emergencies. Fayette Nelson traveled from Pasadena to Gettysburg by train, along with his daughter.

At Gettysburg the veterans were outnumbered. There were only 2,000 old soldiers, along with over 100,000 tourists wanting to see their gathering. President Roosevelt gave the keynote speech, and the army showed off their latest weapons of war. The latter failed to impress men who had already lived through the most deadly war in our nation’s history, and the modern soldiers were disappointed.

Most of the old soldiers made it through the strenuous trip unscathed, but Fayette Nelson was advised by Pennsylvania doctors to rest up before traveling home. So it was that he died while still there in Pennsylvania on July 9th, 1938, perhaps the last Civil War soldier to die at Gettysburg. At his instructions, his daughter brought his body back to Pasadena, to be buried alongside other veterans at Mountain View Cemetery.