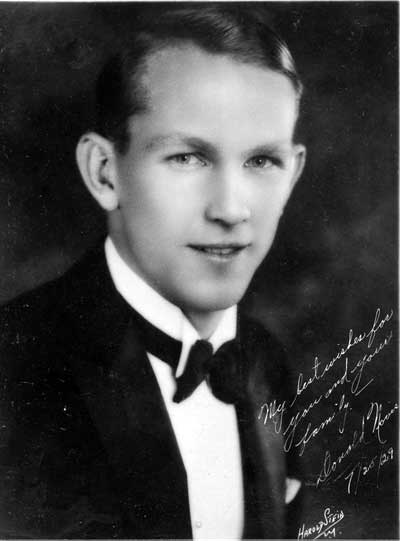 In the early 1920s Americans all over the country were falling under the spell of the newest novelty, amateur radio broadcasting. It was sometimes referred to as “wireless telephone.” Perhaps this is the origin of the British term “wireless” for their radios. Enthusiasts from California to New York were operating primitive broadcasting facilities playing everything from Victrola records (electric recording was five years away) to live local orchestras and solo singers, and lots of piano concerts. One enthusiast was James J. Dunn, who from his Automobile Battery service at 1292 E. Colorado Street in Pasadena, nightly broadcast his programs for all to hear. His station’s call letters were KLB.  The Manuscript Collection at Pasadena Museum of History has a collection of letters written from listeners from all over the United States to J.J. Dunn’s business announcing how they had picked up his programs.  Early radio listeners would brag about how far away last night’s broadcast had come. They marveled over the clarity of the broadcasts and especially enjoyed the solo concerts performed by Pasadena’s local talent. Especially pleasing to some listeners were the whistling programs and one seventeen year old tenor who may have been Donald Novis, a young man who lived just down the street from J. J Dunn’s business and who would go on to become a major radio talent and motion picture star.

Some letters came from as far away as Brooklyn, New York and Boston, Massachusetts. Some of the letters describe their radio receivers and antenna height and length. One described his equipment as a Colin B. Kennedy intermediate receiver wave receiver. Another, from Torrington, Connecticut had a homemade “2-step audio frequency amplifier.” Yet another listener’s “outfit cost $19.95 + $15.00 for Western Electric earphones.” Some of the listeners made requests for musical selections. One fan requested, “that you play ‘Avalon’ on your next regular schedule Monday night from six-thirty to seven-fifteen.” Perhaps the most interesting discoveries among these letters were the ones that revealed that the listeners were able to hear a play-by-play live broadcast of the 1923 Rose Bowl Game between Penn State and University of Southern California.  January 1, 1923 is the first year the New Year’s game was played in the Rose Bowl.  The last two pages of this collection on KLB Radio are an evening schedule and possibly the first “Amber Alert” regarding a young boy who disappeared from his home in Independence, Missouri.  By 1925, these early broadcasters would be forced off the air by the rapid development of commercial radio broadcasters whose signals would take over the existing broadcasting bands. 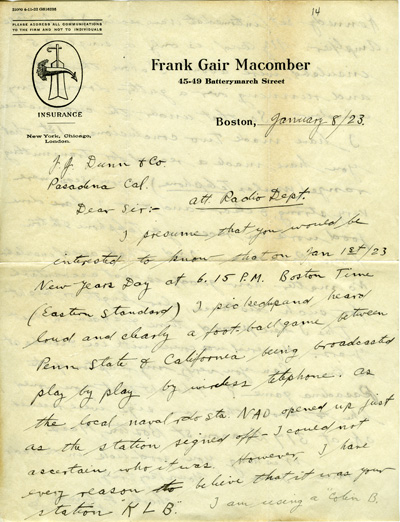