From “Children of the Battlefield” by James Gowdy Clark, 1864:

Upon the field of Gettysburg

The summer was high,

When freedom met her haughty foe,

Beneath a northern sky;

Among the heroes of the North,

Who swelled her grand array,

From happy homes away.

There stood a man of humble fame,

A sire of children three,

And gazed within a little frame,

Their picture for to see.

And blame him not, if in the strife,

He breathed a soldier’s prayer:

And for his children care,

And for his children care. 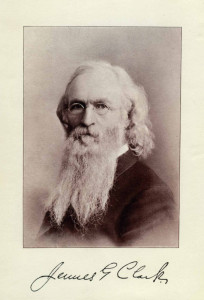 This was the opening verse of a song written and performed by James Gowdy Clark. He is now largely forgotten, but when the war broke out, he was already well-known as a poet, singer, and songwriter, and he tried to enlist in a regiment from New York. Just as in later wars, where celebrities got put in mostly non-combat roles, the Army decided to send Clark out as a celebrity recruiter. Unfortunately, he got sick on the recruiting trip, acquiring a serious lung infection that required months of recuperation. At the recommendation of his doctor, he was released from the Army, ending his “military” career without his firing a shot.

However, he later performed many concerts, with one-third of the gross gate money at each one being donated to the U.S. Sanitary Commission. That kept him fed, and the musical theaters happy, but the overall result was that the money flowed in to purchase supplies to aid wounded and sick soldiers.

He continued to write songs and poems, ranging from heavily patriotic to extremely sentimental, matching the tastes of the time. The fact that he both composed and performed gained him additional notoriety. His poetry was compared by major journals to the quality of others such as John Greenleaf Whittier, but it was pointed out that Clark could also perform his work.

By the late 1880s, poetic and musical tastes were changing, and the creations of Clark were no longer in vogue. His songs and poems were considered by some to be old-fashioned and sentimental. So, he “retired” to the west, after compiling a volume of his works and publishing it.

He first moved to Oregon and stayed with a friend, Clark Havens, himself a Civil War musician. Later both men moved to Pasadena, which already had several Civil War drummers and bandsmen.

James Gowdy Clark then spent the last several years of his life in the Pasadena area, and his brief “military career” and his fundraising concerts made him welcome to the local Civil War veterans. 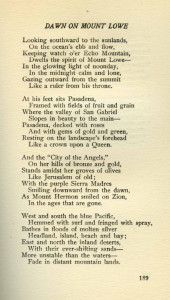 He continued writing about the things he found here, including pieces about the resort created by Thaddeus Lowe.

When James Gowdy Clark died in 1897, his daughter gathered his papers together and found that he had written a great deal which had not been included in his earlier published volume. She published a second, much larger edition, which includes his Pasadena poems.

His longtime friend, Clark Havens, was buried at Mountain View Cemetery five years later, near the grave of the man who was more important as a singer than as a soldier.