Hungarian Crumb Pudding: The Perfect Ending to a Formal Dinner

At the turn of the twentieth century, dinner parties were elaborate affairs, designed to impress and to indicate social status. Evening Dress was the rule – tails for the gentlemen and elaborate evening gowns for the ladies. All of the rituals of etiquette were scrupulously observed. One was expected to arrive neither early nor more than fifteen minutes late. When dinner was announced, the guests processed from the parlor to the dining room. The courses were served a la russe, which meant that the servants presented and passed each course separately. The rules of behavior were set down in numerous books of etiquette and were known to all:  one used the appropriate silverware; one never ate hurriedly; one never drained the last drop from a wine glass nor scraped the last morsel from a plate. And the conversation would have been suitably light, as both ladies and gentlemen were present.

Because the courses were served separately, the guests never saw the entire dinner at one time. Printed menus at each place setting provided an overview of the meal. The New Book of Cookery (published in 1915 by Fannie Farmer) suggests the following elaborate dinner party menu:  Appetizers consisting of Scallop Cocktail, Clear Mushroom Soup, Mock Cassava Bread, Celery and Olives were followed by a Fish course of Stuffed Turbans of Flounder and a Vegetable course of Delmonico Tomatoes.  A Meat Course of Devonshire Saddle of Mutton came next, and then another Vegetable Course of Lorette Potatoes and Baked Stuffed Eggplant.  A Punch was served as a palate cleanser and was followed by a Salad Course, in this case Ginger Ale Salad with Devilled Sandwiches. Dessert was Montrose Pudding (frozen fruit and ice cream in a mold) and After Dinner Mints.  The meal ended with Liptaner Cheese and Water Crackers and finally Café Noire (p. 416, The New Book of Cookery).

A handwritten menu was found pressed between the pages of a Fenyes family cookbook.  It is addressed to “Nora” (the 1910 Census names Nora Mullen as an Irish maid living in the Fenyes household) and indicates that this is the menu for a dinner party for Congressman Markham (Henry Markham was a distinguished Pasadena resident who served in the US House of Representatives from 1885-1887 and then as the eighteenth Governor of California from 1891-1895). The menu also notes that “Mr. Channing will select the wines.”

Eva’s menu followed Fannie Farmer’s template. The festive meal began with Appetizer Canapes (although the individual canapes are not specified). A Russian Turkish soup was next, followed by the Fish course, in this case a simple Boiled Fish with Hollandaise Sauce.  A Vegetable Course of Potato Parisienne and Asparagus Salad was followed by a Meat Course of Roast Saddle of Lamb. Another Vegetable Course of Potato Croquettes and Green Peas and Carrots preceded a lighter Meat Course of Squab en Canape.  Watercress and Apple Compote came next. The Salad Course (again the type of salad is not named) came towards the end of the meal, which concluded with Hot Bisquit (sic), Pudding with Wine Chadeau Sauce, and Coffee. 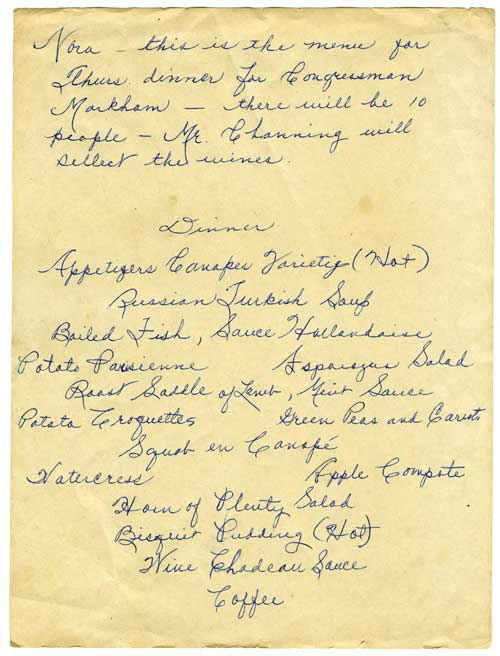 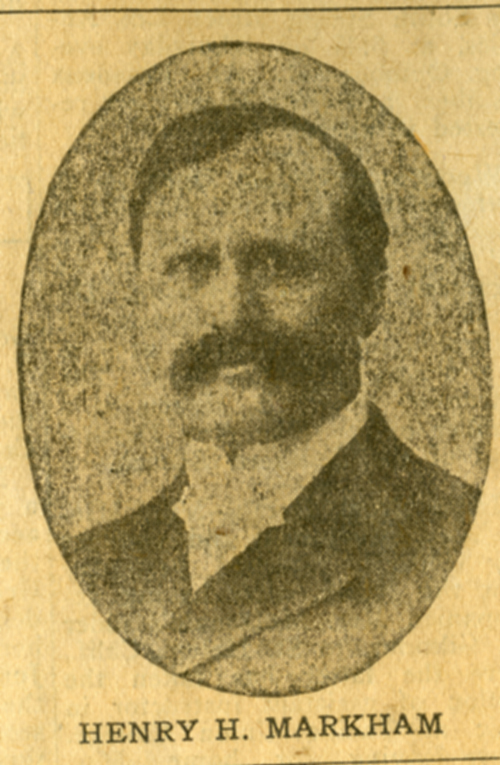 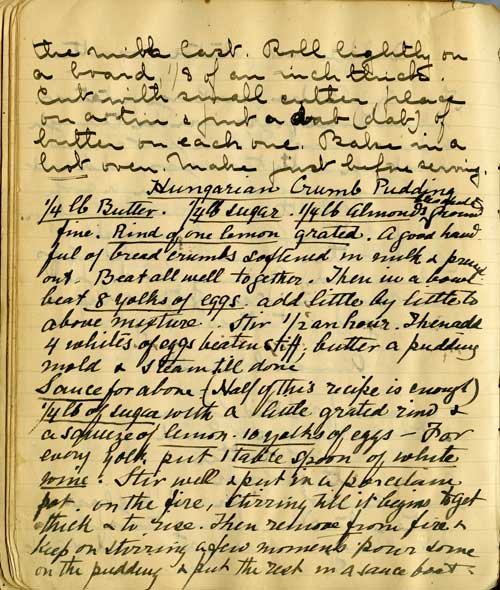 Recipe of Hungarian Crumb Pudding. (Fenyes-Curtin-Paloheimo Collection, Box 197, Folder 9). Click on the image to view a transcription of the recipe.

While we do not have the specific recipes for any of the dishes on this menu, there are many family cookbooks with numerous recipes. One such cookbook contains a version of a boiled pudding called Hungarian Crumb Pudding. This concoction was made with butter, sugar, ground almonds, lemon rind, breadcrumbs softened in milk, and eight egg yolks.  The ingredients were beaten together and then stirred for thirty minutes. Four stiffly beaten egg whites were added at the end. The pudding was then put into a mold and steamed. The wine sauce was made of sugar, lemon, and the yolks of ten eggs. For every yolk, one tablespoon of white wine was added. The whole was then beaten together and heated in a porcelain pot until thickened.

Many of the ingredients in this recipe are measured exactly, in pounds or tablespoons or number of eggs. The recipe specifies that the pudding must be stirred for thirty minutes. The sauce must be simmered in a porcelain pot on the stove. But some of the instructions are a bit more ambiguous:  for example, add a “good handful” of breadcrumbs or “a little grated rind and squeeze” of lemon, and steam the pudding “until done”.  In older recipes, not all quantities or directions were given as precisely as they are today. Much was left to the discretion of the Cook.

But domestic cookery continued to evolve and recipes that used a standardized system of measurement came into use. During the 1870s three cooking schools emerged in the United States:  the New York Cooking School, the Philadelphia Cooking School, and the Boston Cooking School. The original mission of these schools was to teach working class girls proper nutrition and diet, standards of cleanliness, and how to cook “scientifically”, with precision. Eventually these same courses were offered to middle class women as well.

Fannie Merritt Farmer of Medford, Massachusetts enrolled in the Boston Cooking School and trained there until 1889. In 1891 she became the school’s Principal. Fannie Farmer is known as the Mother of Uniform Measurements. Her best known work, The Boston Cooking School Cookbook, was published in 1896 and pioneered the concept of level measurement using standardized measuring spoons and cups. This turn of the century cookbook changed the way women cooked and is still in print more than 100 years later.