As the veterans of the Civil War grew older, they faced many problems. One of the main political lobbying efforts of the Grand Army of the Republic was to force the U.S. government to take care of the soldiers who had fought to preserve the Union. Thus, while there was no such thing as Social Security for the general population, many Union Army and Navy veterans were able to draw small disability pensions, especially if they had been wounded or made seriously ill during the war. 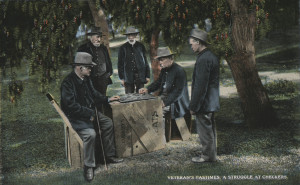 Postcard from a commemorative series, issued by the Pacific Branch National Home for Disabled Volunteer Soldiers, in Sawtelle, circa 1890. Courtesy of Nick Smith.

In addition, a series of hospital/retirement home complexes were built around the country for the benefit of these aging men. These became the basis of the Veterans Administration hospitals, and the one here in southern California was on the grounds of the modern V.A. The military cemetery in what is now Westwood originated with graves of Civil War veterans buried near the Soldiers’ Home at what was then called Sawtelle.

For reasons that made sense to military bureaucrats at the time, in order to receive full-time medical care at Sawtelle, a veteran had to live and/or eat his meals there. If he was married, it meant that his wife had to find a place to live nearby so the soldier could walk home at night. This was the origin of the residential neighborhoods that now surround the V.A. facilities and had the odd effect of making Brentwood a very valuable piece of land. Which was ironic since it was named for the former owner, a Confederate officer named Joseph Lancaster Brent, who had taken the land in trade for legal work done in the late 1850s.

The men living at the Soldiers’ Home wore military-style uniforms and, if they lived at the facility, lived in barracks and ate in military-style mess halls. The Home was often the last resort for men with incurable medical problems, and so the cemetery was a natural outgrowth for the men who died there with limited means. A free grave site and headstone meant a lot to a soldier’s family in those days.

For ex-Confederates, the problem was more difficult. Since they were the “enemy,” they were not eligible for Federal benefits in terms of pensions or medical care. Some southern states made provisions for limited medical care, especially soon after the war, but in many areas private groups were the only source of aid. Here in southern California, the United Daughters of the Confederacy funded a retirement home for ex-Confederates. It was called Dixie Manor and was located in San Gabriel. 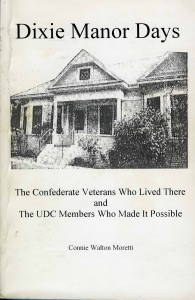 Not opened until 1929, Dixie Manor was the last of these private retirement homes to be opened around the country. It was basically a large boarding house with twelve rooms, including an infirmary, and it was opened because the U.D.C. had learned that former Confederates were living in the county poor farm due to health or money problems. Dixie Manor became a minor tourist attraction for visitors from the South who wanted to meet these aging veterans. As men died, others took their places. The local U.D.C. chapters, including the one in Pasadena, provided the funding for Dixie Manor until it eventually closed in the late 1930s after a period of sudden decline due to the deaths of several of the residents within a short time period.

About half of the men from Dixie Manor are buried at Hollywood Forever Cemetery in graves provided by the UDC.