The Mystery of the Horn Chair 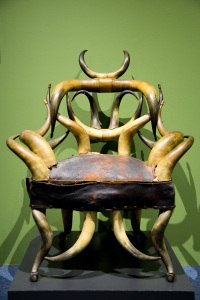 Tucked away in a quiet corner in the attic of the Fenyes Mansion, the horn chair has long been an object of fascination for the Museum staff. Recent research in the archives of Pasadena Museum of History revealed some of its history, but left us with more of a mystery to uncover.

Horn furniture, thought to evoke the spirit of the pioneering west, enjoyed a period of popularity in the United States from the 1880s through the early decades of the twentieth century. Many manufacturers were based in Texas, Illinois, Kansas, and Missouri, often near stockyards where there was easy access to cattle horns. Horns were fashioned into chairs, tables, and hat racks, as well as smaller accessories such as knife handles, canes, and buttons.

This horn chair was given to the Museum by Mrs. James Elms in 1958. James Elms grew up on a small ranch in Los Angeles and moved to Altadena in 1903.

Soon after the donation was recorded in the curator’s files, C.F. Shoop, a local history correspondent, published an article about it in the Pasadena Star-News (January 26, 1958). He claimed that the chair had been made for Don Juan Bandini by his ranch hands.

Is there any truth to this claim? The renowned Don Juan Bandini (1800-1859) was hugely influential in the development of Southern California. The fashion for horn furniture did not emerge until twenty years after his death, and although the chair is rustic in style, it was certainly constructed by a skilled furniture craftsman rather than a ranch hand. 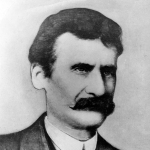 Arturo Bandini, the eighth son of Don Juan Bandini, had the strongest connection to Pasadena (People-Bandini)

Many of Don Juan’s children settled in the Los Angeles and San Gabriel Valley. They included Arcadia Bandini Stearns Baker, called the wealthiest woman in California, and Juan Bautista Bandini, the managing editor of the Los Angeles Herald. Arturo Bandini, the eighth son of Don Juan, had the strongest connection to Pasadena. His 1903 Greene & Greene-designed home evoked the spirit of the California ranchos. A longhorn steer chair would not have looked out of place in the Arturo Bandini home, although the chair does not appear in any of the known interior photos. For now, the mystery of the horn chair remains unsolved.

This chair was on display for the first time in the 2014 exhibition Crown City Jubilee: Celebrating Significant Anniversaries in Pasadena.