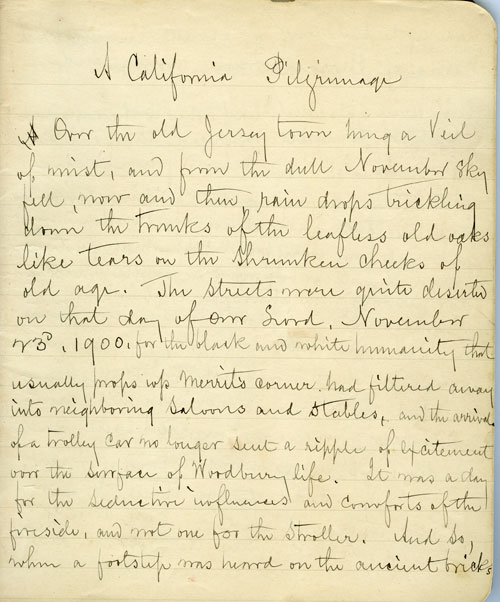 “Thursday, Nov 29”
“This was Thanksgiving Day, and Mrs. Green spread for the pilgrims a royal, old-fashioned New England Thanksgiving Dinner. George vowed that he’d be dog ond [sic] if the oysters didn’t surpass those at Woodbury, three plates of raw being his usual allowance after and evening’s cramming in Latin. The Col. remarked that George kept him in a stew most of the time. Turtle soup whetted the appetite for the colossal turkey that came hot and richly brown as the great dish of the feast. The Col’s carving was a perfect anatomical achievement. And when deserts [sic] followed claret and champagne flowed with a pleasing gurgle down the canons [canyons] of human throats. Toasts were drunk, good cheer was prevalent, and when the feast was ended the pilgrims stole away one by one to quiet corners and tenderly thought of the dear ones of the dear old days who were keeping their perpetual Thanksgiving in the Better Land.”

Traveling across northern Arizona that day, the train reached Needles, California, at 9:00 pm.  According to Agnes:

“…the train was divided into two sections. The Green car was detached, pulled back half a mile, attached to other cars, then detached again, and handed back and forth for an hour smashing, bunting [sic], plunging, crashing into other cars, now on our track, now on another, then back again to the starting point to the wonderment and disgust of all the pilgrims. Four and a half hours behind the schedule, the train pulled out for Barstow, where in the early morning the same bumping and thumping were repeated.”

Agnes doesn’t say if the “bumping and thumping” affected their Thanksgiving meal. If it did, surely there was a good supply of Colonel Green’s “August Flower” on board for anyone who required it. 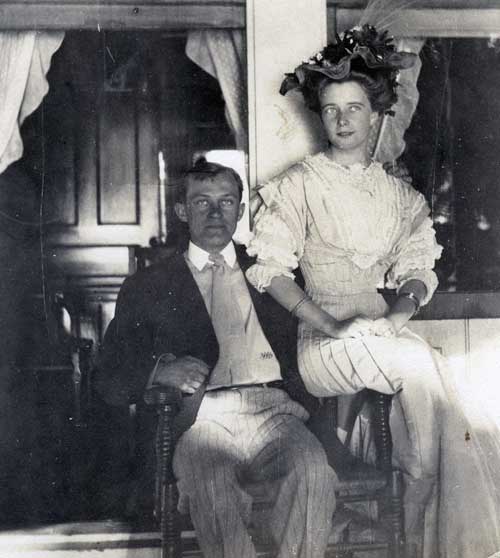 “A California Pilgrimage” – a story by Agnes K. Green- is part of the George G. (Gill) Green Collection at PMH.  The collection includes personal and business records of George G. Green (1842-1925), a manufacturer of the proprietary medicines based in Woodbury, New Jersey.

It is unknown when Agnes wrote “A California Pilgrimage.” It is doubtful that she was with the Green family during their November 1900 train journey.  She was born in April of 1888 and was twelve years old living and in San Francisco when the census was taken on June 5, 1900. From her vivid descriptions, we can surmise that she heard these stories many times before she set pen to paper and became the family historian- sometime after her marriage to George G. Green, Jr. in 1907. 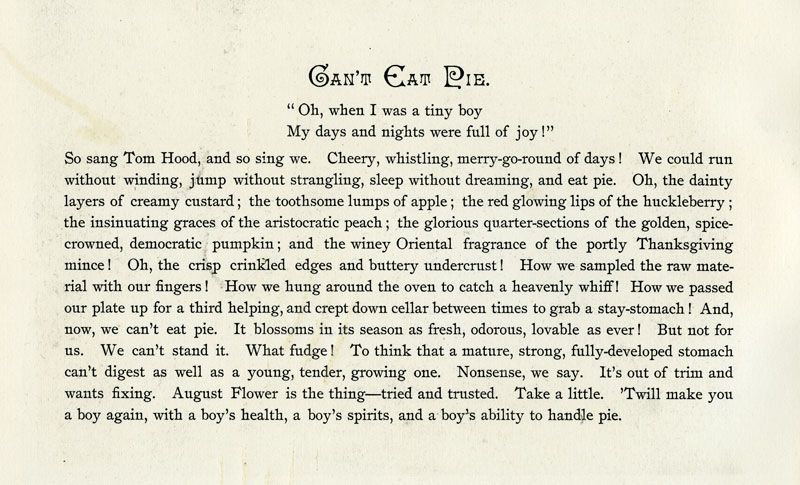