All Aboard!: Riding the Rails with Colonel G.G. Green 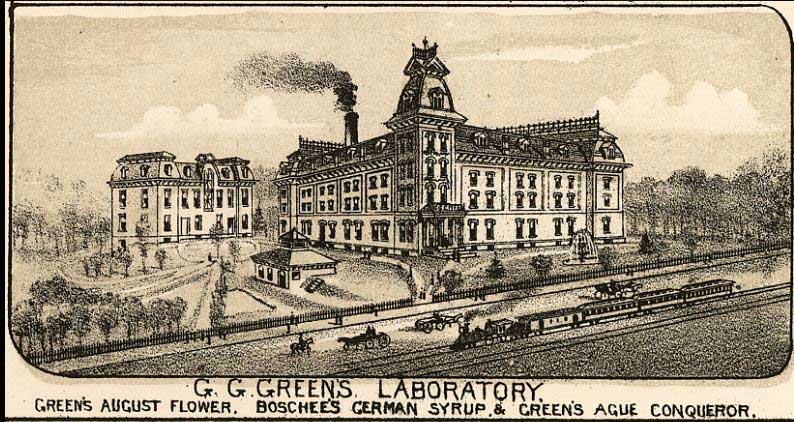 G.G. Green’s Laboratory. Note the train in the bottom of the image. (www.preservewoodbury.blogspot.com)

Imagine traveling cross country in your own private palace car. That is how early Pasadena promoter and patent medicine manufacturer Col. George G. Green crossed America in the late 1800s. When his train car was parked near his home in Woodbury, New Jersey, he would open it for public viewing prior to his departure for his winter home in Pasadena, California. During the winter months, the car would be parked on a spur of the Pasadena & Los Angeles Electric Railway near his home in Altadena, California.

An 1888 newspaper article in the Pasadena (Cal.) Daily Herald  states, “that out of the large number of private cars arriving at Los Angeles, Mr. Green’s claims the envy of all and is pronounced the finest arriving on the coast. The car is not fitted with gaudy fancy tapestries, but instead is elegant in its handcarvings and choice woods.” 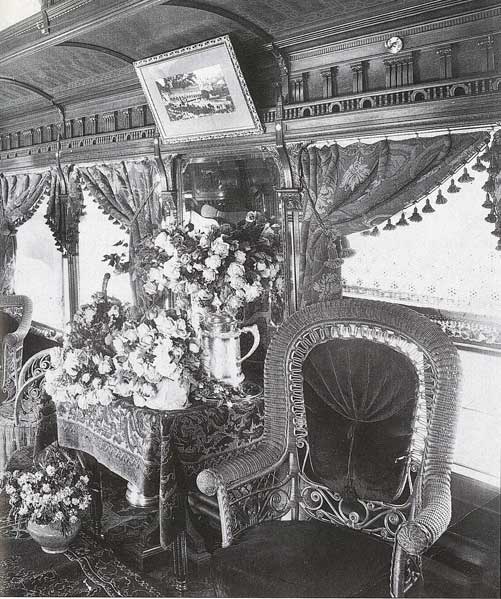 The George G. Green Collection housed in the Archives at Pasadena Museum of History includes a copy of a scrapbook belonging to Col. Green. Green of collected newspaper articles that provide insight into the history of his “Private Palace Car.” A clipping from the rare Mountain Echo newspaper of Monroe County, Pennsylvania indicates that Green’s was one of the first three cars to be sold to individuals independent of the railroad industry. The car was seventy-one feet long- six feet longer than ordinary palace cars. This same article describes in great detail the floor plan, interior decorations, and amenities. The “appointments were elegant and the $18,000 that it cost seemed well spent.” The rooms included a ten by ten foot observation room, drawing rooms for both Colonel Green and his wife, two toilet rooms, a parlour, sleeping rooms and berths, and a kitchen that included a range, refrigerator, closets for silver, china and wine, and a pantry. The dining table could accommodate fourteen guests. Under the car were large chests for carrying ice and other supplies. The running gear had all the patented and latest improvements the Pullman Car Company invented- the wheels were of paper, forty-two inches in diameter; air brakes; safety valves and couplers all of the latest designs. The car was delivered to Green in August 1887.

Colonel Green had a penchant for giving special names to his children, his homes, and his personal property. His Pullman car was no exception. Christened the “Three G’s” (some say it was called The Altadena), its naming followed those of Green’s homes– Castle Lawn with Gray Towers in Woodbury and Kil Kare Castle at Lake Hopatcong, New Jersey; his yacht The Altadena; his steamship Seaside Park; and his youngest daughter Altadena Green born in New Jersey in 1888.

Green’s excursions regularly took him to his homes at Lake Hopatcong, Lake George, Saratoga, Florida, Mexico, and the Pacific Coast. The cost incurred for transporting the train car east of the Missouri River was eighteen regular passenger tickets. West of the Missouri River, the cost of pulling the car was fifteen tickets.

A letter written by the general passenger and ticket agent of the Pennsylvania Lines West of Pittsburgh to Colonel Green in 1900 is an indication of the planning that occurred in scheduling trips:

Leaving Philadelphia Saturday November 24th at 4.30 P.M. on train 21, to run through to Chicago via Columbus and the Pan Handle Route; car to be delivered after arriving at Chicago Station to the San Fe People, and they to be notified of its arrival. The Santa Fe people also to be notified that you wish to go forward on their “Overland” train leaving Chicago Monday Evening 26th instant.”

There were several occasions when Green lent his car to friends and family. When the son of his friend Philip D. Armour (an Altadena neighbor of Green’s) died in Santa Barbara in 1900, Green sent his car there and it was used to transport family members and the deceased to Chicago. Another time, the car was used to transport his wife’s family on the occasion of her father’s death.

The San Diego Union newspaper on September 15, 1915, reported that for safety reasons Col. Green’s family wanted him to sell the car. (Wooden cars were no longer deemed safe.) “This Colonel Green has refused absolutely to do. For four years it has stood in its house on a siding on the estate, where every care is taken of it.” “Since 1912 Colonel Green has not been West.” “…the famous old family Pullman remains still, except occasionally, when it is given a short run to “exercise” its papier-mache packed wheels.”

Ms. Anderson later wrote a follow up to this blog with additions and corrections titled “Back Up the Train!”