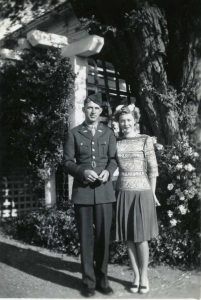 Grayson Arts, the firm which created artisan ceramics for the bath and home, was founded by husband and wife team John “Gail” and Helen Lee Grayson.  Begun as a hobby designed to bring them more “together time” after World War II, their ceramics venture evolved into a business that would span more than thirty years.

Both from Galveston, Texas, Gail was a designer for a large furniture store there (Kahn and Levy) prior to enlisting in the army.  With appliances unavailable due to the war effort, Helen Lee was hired on to create a gift department in their place.  The ceramic pieces filling her department inspired her…while Gail, now stationed in California, was being similarly impressed by the ceramic work of a friend he’d seen while there.  They wrote to each other at the same time, both saying “I found the hobby we can do together, ceramics!”  It was meant to be!  It became a goal that helped through the difficult war years when Gail was in the Battle of the Bulge, and other confrontations that left him wounded in action.

Upon his return home, Gail enrolled at Woodbury College (Los Angeles) to study interior design.  With housing scarce, they found and fixed up a used trailer that they drove to California and lived in for 2 ½ years in Monterey Park.  The couple took night classes in ceramics, and three months later, they returned to Galveston for Christmas, taking the pieces from their classes to show their former boss at Kahn and Levy. She gave them their first order for $200.00, and a business was born. Living in the tiny trailer didn’t deter them. Initially, they paid someone to fire their ward; then they bought a small kiln that stood just outside their door, under the awning. 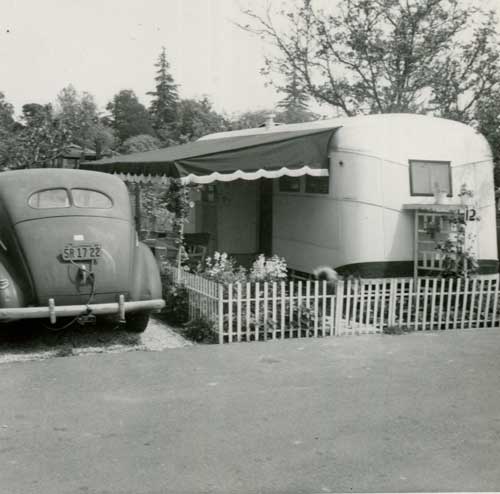 Trailer in Monterey Park with kiln located under the awning, circa 1946. Image courtesy of Nina Hoecker

In 1948, they found a lot in Altadena where Gail designed and built a home that combined their living space at street level, and a work space out-of-sight below.  The business was a neighborhood affair where residents found part-time work and their children learned and played in clay. 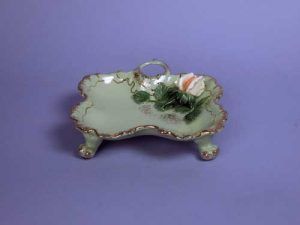 The business grew to include retailers large and small, from department stores like Bullock’s, J.W. Robinson’s, and Macy’s, to gift shops around the country.  They showed their line twice a year at the San Francisco and Los Angeles (Biltmore Hotel) gift shows. In 1970, they moved production to a historic barn on San Gabriel Boulevard in Pasadena, which they shared with another ceramics firm, Madeline Originals.

The early objects came in white or pastels of pink or green, most decorated with hand-sculpted roses and leaves, and finished with gold detailing.  Soap dishes of varying styles were the “bread and butter” of the company, complemented by a wide range of other items for the bath and home.  As styles changed in the sixties, the line adapted with simpler shapes in vivid colors designed to coordinate with the latest in towel colors.

Upon Gail’s death in January 1977, Helen Lee enlisted the help of Gail’s nephew, Jimmy Grayson, and the business continued on for several additional years.