The John F. Godfrey Post, Grand Army of the Republic

The John F. Godfrey Post was far from the first Grand Army post formed in California. In fact, it was the ninety-third! Pasadena didn’t form a Post until a big upsurge of interest in the G.A.R., which occurred around the twentieth anniversary of the end of the Civil War. So, in 1885 the local veterans organized to form the Godfrey Post. 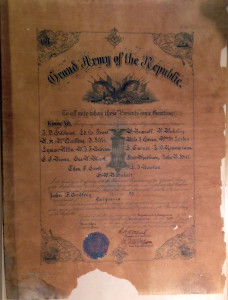 John F. Godfrey was not particularly famous. He had served in the war in the 2nd Maine Artillery and got promoted up through the ranks all the way to Lt. Colonel by 1864, when he had to resign due to ill health. In 1865, he rejoined the army, and ended up fighting against the Sioux in the west. In 1871 he moved to Los Angeles and served two terms as city attorney. In 1876, on the second anniversary of the founding of the Indiana Colony, he was an invited guest speaker at the event. Sadly, Colonel Godfrey died in early 1885. Fellow Maine man E. S. Frost [1st Maine Cavalry] suggested that the Post be named after Colonel Godfrey, and the charter members agreed.

The charter meeting where this decision was made was held at the lending library that was the forerunner of the Pasadena Public Library. It was then in a rented building along what is now Colorado Boulevard. This was the start of a long connection between the Godfrey Post and the library. Documents were signed, and the Godfrey Post was formed.

The members of the new organization began working on events and activities, and a mere six months later staged the first big Memorial Day event in Pasadena. There were only a handful of veterans’ graves in the four-year-old local cemetery, Mountain View, so the big event that year was a group visit to the local Methodist Episcopal church on May 30th, 1886. The minister at that church was the Reverend A. W. Bunker, formerly of the 1st Maine Artillery. Yes, a Maine connection again.

By the 1890s, local historian and Godfrey Post member Hiram Reid was keeping a list of local veterans’ graves, and making sure that the local newspapers printed it each year for Memorial Day. 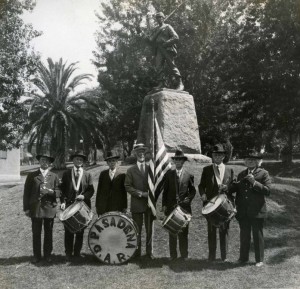 In 1906, Godfrey Post members and others from the local community raised funds to build a Civil War monument in Library Park, now called Memorial Park.

In 1912, the largest gathering of Civil War veterans ever to come to southern California was in Los Angeles, the National Encampment of the G.A.R. One whole day was dedicated to a side trip to Pasadena with a daytime party hosted by the Godfrey Post, also in Library Park.

Most years, the Godfrey Post also took part in the Rose Parade, as well as Memorial Day parades. The fife and drum corps marched and played at patriotic events, and the veterans visited the local schools to talk about their wartime experiences.

As Pasadena grew, so did the Godfrey Post. Newspaper articles as late as the 1920s pointed out the unusual number of local veterans for the size of the city. In 1926, news reports indicated that the Godfrey Post was the third largest G.A.R. post in the West, and that the other two were in much larger cities.

As with all Grand Army of the Republic Posts, eventually the men died out and the Post was shut down. The last founding member, Adam McQuilling, died in 1940, and the last member overall, Oliver Haney, died in 1946.