By Their Gallantry in Action 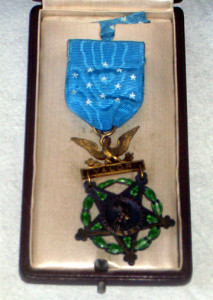 When the Civil War began, the United States had no official medals or other decorations that could be awarded to soldiers or sailors for bravery or special merit. This was deliberate. General Winfield Scott, a soldier in the U.S. Army since the war of 1812, had lobbied against such things as being “too European” and a violation of the egalitarian spirit that made the U.S. distinctive from the kingdoms and empires of the Old World.

During the course of the Civil War, many of the medals were given out without serious consideration, and some were later revoked. Many of the recipients, though, were given the medal for actions “above and beyond the call of duty,” in terms of risking their lives to save comrades, or to achieve unusually difficult goals.

Of the hundreds of veterans who came to Pasadena, only two received this high honor.

Milton Lorenzo Haney, a minister when the war broke out in 1861, joined the 55th Illinois and became a company captain. This was not unique, and my own theory is that ministers often had trained voices that could carry when needed, a good trait on the battlefield, and they were known and trusted by the men, who often elected their lieutenants and captains when a regiment was formed.

Haney did not remain a captain for long, though, and eventually became the regiment’s chaplain. Late in the war, during the summer of 1864, the 55th Illinois was part of the army that marched across Georgia, creating a swatch of destruction remembered to this day. During the fighting near Atlanta, Chaplain Haney grabbed a rifle and joined an attack aimed at regaining a position temporarily taken by the Confederates. This greatly inspired the men, who went on to success in the battle. For their valor in Georgia, Chaplain Haney and three other men were awarded the Medal of Honor. Like many officers who were eventually awarded the Medal, Chaplain Haney’s was not awarded until the 1890s, when the rules for the Medal were re-written and clarified.

Chaplain Haney’s health suffered from his time in the army, though, and at the end of 1864 he received a discharge. He spent much of the rest of his life as a minister, but was also plagued by illness, and was granted a pension when he applied in the 1890s. The application for this pension was accompanied by a petition signed by many of the men who served with him, attesting to the wartime as the source of his health problems.

These pensions were not large but were designed to help these aging soldiers with amounts based on the soldier’s rank and the degree of disability. By 1915, his pension had grown to the princely sum of $30 a month, and shortly before his death, at the age of 96, he was granted an increase to $50 a month. 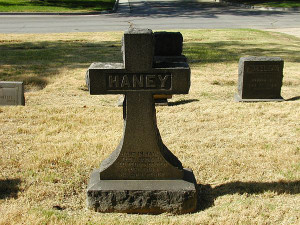 Unlike many of the local veterans, Milton Haney was buried under a headstone that made no mention of his military service, or of his unusual valor. Unlike the equally long-lived Reverend Higgins, he had put the war behind him, did not participate in most events for veterans, and doesn’t seem to have joined the local G.A.R. post. For Milton Haney and some others, the war was in the distant past.

As far as the other local recipient of the Medal of Honor, Thomas Ellsworth, his story will be told in an upcoming blog post.