The Arts & Crafts Origins of the Finnish Folk Art Museum

Many people who’ve been to the Finnish Folk Art Museum assume this “tupa,” or Finnish-style farmhouse. was designed in authentic Scandinavian style. But in its earliest years the building was a Swiss-style garage built for Pasadena benefactor Arthur H. Fleming. 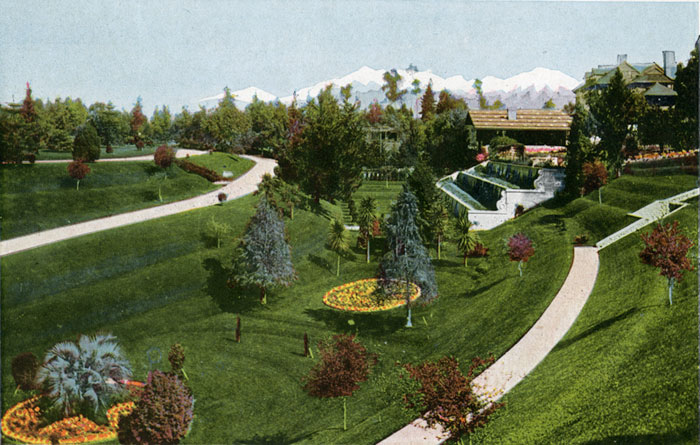 The Fleming garage, with rocks atop its wide-sloping roof, can be seen behind a large double planter with its massive volutes in this postcard of Busch Gardens (Main Photo Collection, B7-10)

Fleming (1856-1944) had made his fortune in the lumber business when he joined the procession of millionaires moving to Pasadena in the 1890s. During his residence in the city he was a board member of Throop Polytechnic Institute, the predecessor of the California Institute of Technology. Fleming was one of Cal Tech’s most generous benefactors, paying employees’ salaries with his own money and negotiating contracts with prospective faculty.

In 1930, when he was president of Cal Tech’s board of directors, he persuaded Albert Einstein to come to the university. As related in a “Los Angeles Times” article, Einstein agreed to visit during the winter on the condition that his trip remain secret, at least initially. But the secret became public when Einstein decided to make his own travel arrangements rather than allowing Fleming to contact high-ranking friends and government officials to organize the trip to Pasadena.

In 1899, Fleming moved to a newly built house at 1003 South Orange Grove Avenue. Nicknamed “Millionaires Row,” the street was the site of numerous mansions constructed for other tycoons. Fleming’s property adjoined the residences of Thaddeus Lowe on the north and Adolphus Busch on the south.

Fleming’s home was designed by Frederick Louis Roehrig (1857-1948), who built many residences in the area as well as the 1898 annex to the Hotel Green, with the bridge across Raymond Avenue.

Fleming’s mansion resembled a Swiss chalet and is considered one of the first Craftsman-style building in Pasadena.  In 1910, Roehrig built a garage for Fleming that matched the Swiss style architecture of the mansion. 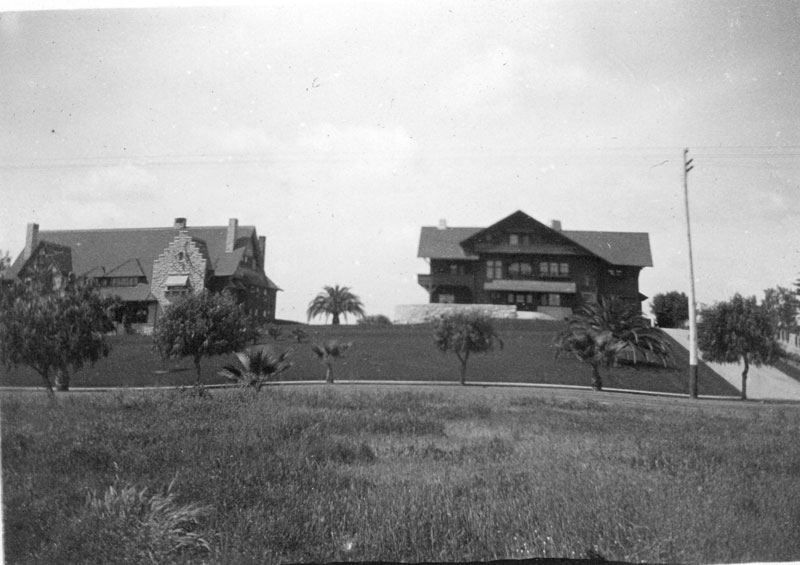 Fleming’s Swiss-style mansion (right) was designed by architect Frederick Roehrig in 1898. The residence on the left was built for John S. Cravens who named it “Ivy Wall” and sold it in 1905 to brewer Adolphus Busch (Main Photo Collection, H13-4B)

According to an article in Pasadena Museum of History’s archives, the garage’s proportions, “like the house, were large (40 by 32 feet), and its most distinctive feature was a wide-sloping roof of 3-foot-long shingles held down by rocks, to resemble an Alpine chalet. The garage was located at the very back of Fleming’s property, overlooking the terraced slopes of Busch Gardens, and can be clearly identified in early photographs by the rocks on its roof.”

Fleming’s residence, like many others on South Orange Grove, was demolished. But the garage survived and was converted to living quarters in 1945. 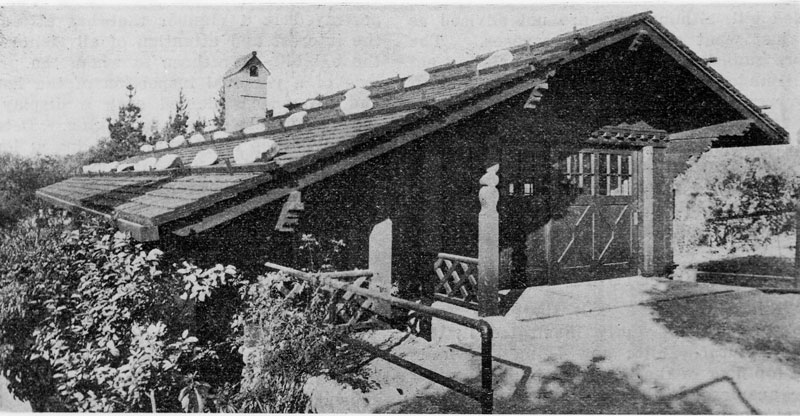 A close-up of the Fleming garage after it was moved to the Fenyes Estate and converted to a guest house and sauna. The large glass windows replaced the original garage doors. In 1974, the building was converted to the Finnish Folk Museum (Main Photo Collection, PHS6-4)

George Paloheimo, the Finnish consul for the southwestern United States, purchased the former garage in 1949. Paloheimo’s wife Leonora was the granddaughter of Eva Fenyes.  Paloheimo moved the building to the Fenye s Estate, where the interior was remodeled to become a guest house and sauna. The exterior was also altered, with large plate-glass windows replacing the original doors.

In 1974, the Fleming garage was again remodeled. With help from the Finlandia Foundation — an organization Paloheimo founded in 1953 to promote the culture of his native country —  the building became a museum displaying artifacts typically found in a Finnish farmhouse.

PMH visitors can go inside the former garage, now the Finnish Folk Art Museum, at the end of the Fenyes Mansion Tour.