By the late 1930s, there were only a handful of Civil War veterans left in Pasadena. Unlike in earlier days, there were no big groups of them attending events, such as parades and movies. That was just as well in some cases, as they would have laughed themselves sick at a showing of Gone With the Wind. Too many of the local veterans had been there at the fall of Atlanta to take the movie’s version of history seriously.

These older veterans did spend time thinking about the future though. The very nature of the Grand Army of the Republic was that the organization would die out with its members. Only the men who had served to protect the Union during the Civil War were eligible, and even the youngest of those were growing old. So, plans were made. When possible, the Sons of Union Veterans organization would take over the physical properties owned by the G.A.R. As the last man in any given Grand Army post died, the possessions of the Post were to be packed up and given to a local historical society, or shipped to the nearest G.A.R. post still in existence. The Daughters of Union Veterans were given special keepsakes, like the board of photographs that has been on display in the museum during the exhibit. 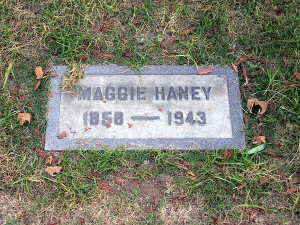 During America’s participation in World War II, attention as taken away from the passing of some of these old veterans. Local newspapers still ran articles about them when possible, and celebrations of 100th birthdays or other special events continued to be held. Smaller G.A.R. posts shut down as their last members passed away. In some places, including Pasadena, the G.A.R. posts changed the rules for their grave sites and permitted wives and widows to be buried in G.A.R. plots, along with or instead of their husbands (some of the husbands were buried in the cemetery at Sawtelle, in government graves).

In Pasadena, the last G.A.R. man was Oliver Haney. He had joined the army late in the war, serving in a Pennsylvania artillery unit beginning in 1864, and he had stayed in the army until 1866. While here, he was a relatively quiet man, and only accepted the position of Commander of the Godfrey Post because he was the last man willing and able to do the work after all those years.

In November of 1946, on election day, he was in the news for a human interest story. Since the election of 1864, when he had lied about his age in order to vote for Mr. Lincoln, Oliver Haney had always walked to the polling place. Unfortunately, he also had another habit, just as long, of smoking cigars. His doctor told him that his second habit was why he was having trouble breathing well enough for long walks. So, in order to continue walking to the polls, he gave up an eighty-year cigar habit, cold turkey. His voting tradition was more important, and he was stubborn enough to do it. He walked to the polls and politely refused to answer questions from reporters about who he voted for.

Then, a few weeks later, he broke his hip in a freakish accident tripping over his own cane. He never fully recovered and died a few weeks later. He was buried alongside his wife, who had been buried in a G.A.R. grave a few years earlier.

The Godfrey Post of the Grand Army of the Republic closed its record books for the final time, and for the first time in the history of Pasadena there were no Civil War veterans alive and walking the streets of the city.