The Fife and the Drum 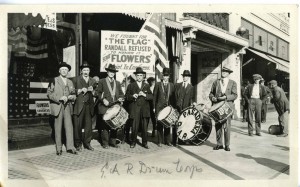 “The John F. Godfrey Post, G.A.R.’s “Drummer Boys of ‘61 ” met much applause. “When Johnny Comes Marching Home” was the song theme, and on the float a group of eight aged veterans with fifes and drums stirred anew the spirit of old with their lively music.” –Los Angeles Times, January 2, 1927

During the Civil War, there were three musical instruments that were a part of the battlefield, and others used in camp. Some regiments had full bands for use in parades and as entertainment away from the battlefield.

The fife was an old instrument, basically a flute with a limited range of notes, and useful on the battlefield because it was pitched so high that its sound carried over many of the sounds of battle. By the time of the Civil War, the larger battles made more noise, and so the fife was being rendered obsolete for its original purpose, but was still used on marches.

The bugle and the drum were still used for signaling commands on the battlefield. Both, like the fife, were used due to the carrying power of their sound, but in practice the bugle and the drum were more distinguishable against the rattle of musketry and the boom of artillery fire. The commands played on those instruments were how officers commanded bodies of troops at a distance, and the sounds carried so far that during the Civil War, distinctive “introduction” signals began to be used, to make sure that troops obeyed the commands from the correct bugler.

The bugle, often used as a solo instrument for signaling commands, was not usually used in marching but became most famous for its use in the cavalry, signaling the charge. Its other famous use was to wake up troops or send them off to sleep, with the bugle calls now known as “Reveille” and “Taps.” During the Civil War, though, most camp commands were signaled by drums. There were probably more drummers than trained buglers.

Due to the demands of both training and lung power, buglers and fife players were normally grown men, but tradition held that a drummer could be a younger boy. By law, a drummer in the U.S. army had to be at least thirteen years old. Some were younger, including the famous Johnny Clem, who became the inspiration for a Disney film, The Drummer Boy of Shiloh. Local veteran John McDonald lied about his age, and joined his regiment at the age of twelve.

Thus, drummers were typically five or more years younger than the men around them in battle, at least at the start of the war. Thus, they were often the youngest veterans of their regiments, if they survived. In some cases, they were also the youngest casualties and were exposed to the horrors of war when their peers at home were not yet in high school. 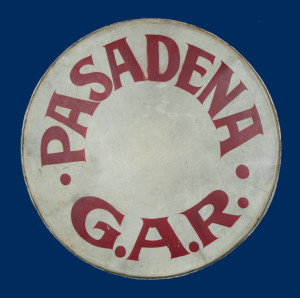 Of the veterans who came to Pasadena, quite a few were musicians during the war. In the 1890s, some of the members of the Godfrey Post of the Grand Army of the Republic said “let’s put the band back together” and formed a fife and drum unit for parades. For the next thirty years they marched or rode in events. In fact, they mostly marched until the late 1920s, when they finally had to admit to themselves that they were all in their late seventies or older, and that marching in parades while playing instruments had become a little strenuous.

In the 1927 Rose Parade, though, there were still several active members of the group.

They continued to play at events into the 1930s, at Memorial Day and other ceremonies. Their largest surviving drum is part of the museum’s permanent collection.