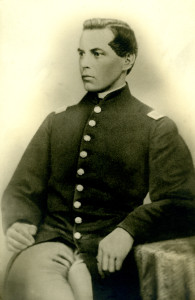 “Under a heavy fire carried his wounded commanding officer from the field.”–
from the Medal of Honor citation of Thomas F. Ellsworth, 55th Massachusetts Infantry

This unusual situation was due to the equally unusual nature of the 55th. It was the second African American regiment recruited by the state of Massachusetts, and it was made up of men from all over the Union who had come to Massachusetts to volunteer. The men who arrived after the planned 54th Massachusetts Infantry was filled were put into the unplanned 55th. The governor, surprised and overwhelmed by the response, had to get more weapons, more equipment, and more officers for this overflow regiment.

Thomas Ellsworth, only twenty-two at the time, was offered this unusual choice because the position of officer in such a regiment had extra dangers attached. Confederate officials had publicly announced that white Union officers found in command of African American soldiers would not be treated as normal prisoners of war if captured, but would instead be tried for the capital offense of inciting slaves to insurrection. While they eventually backed down from this position, in actual combat situations such officers were expected to be special targets for Confederate abuse. So, the state’s governor wanted experienced soldiers willing to take extra risks for these new positions.

Ellsworth accepted the challenge and joined the 55th. Because the Army’s bigoted chief paymaster had not yet been brought to heel by Congress, the unit was in turmoil. Like the 54th and other African American units, they were not being given full pay. Instead, they were offered pay at the rate of civilian unskilled laborers, which they refused to accept. 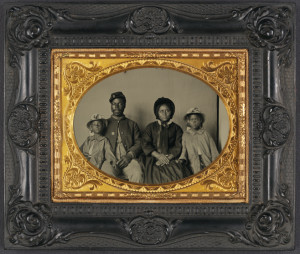 Unidentified African-American Union army soldier and his family, 1863-1865 Courtesy of the Library of Congress (AMB/TIN no. 5001)

While they turned down their insulting partial pay, they did not turn down the chance to serve as soldiers. Often used as garrison troops or fortress-builders, their boredom was interrupted by use as raiding troops. This involved brief forays into South Carolina and Florida for the purpose of disrupting the Confederate infrastructure, rather than in set battles.

In November of 1864, the 55th was sent, along with other troops, into South Carolina for the purpose of disrupting rail lines out of Charleston. The plan was that this would aid Sherman’s continued march across the south, ironic since Sherman had made it clear that he did not want African American troops in his own army. Due to major blunders by the general in charge of the operation, the 55th and the other troops arrived at Honey Hill too late to prevent it from being reinforced. The failures of the other regiments involved caused the 55th to advance into devastating fire unsupported.

After heavy casualties ensued, Lieutenant Ellsworth rescued the regiment’s colonel and gave commands to enlisted man Andrew Jackson Smith to rescue the regimental flag and help rally the troops. Both men were promoted and awarded the Medal of Honor, but both medals were greatly delayed. Ellsworth’s did not arrive until 1895, after his retirement to Pasadena. Smith’s did not arrive until 2001 and was awarded by President Clinton to Smith’s daughter, who was still alive.