E.S. Frost spent his time in the Civil War in the 1st Maine Cavalry. He survived the bullets that flew around him at various major battles, but not the germs. He came home from the war with damaged lungs, and had to give up his prewar career as a machinist.

Thus, he became a traveling salesman, a job which would keep him active and in the fresh air, per his doctor’s wishes. Unfortunately, even that was too strenuous, but it had given him exposure to the home crafts that were common in New England. He noticed that many women, including his wife, made their own needlework such as hooked rugs, but by very labor-intensive methods, especially the designing of the patterns. While recuperating and rethinking his life, he invented an improved rug hook and a method for creating patterns for hooked rugs by printing onto the burlap backing material with a special form of metal templates. His method was sound, and his pattern business became very profitable. 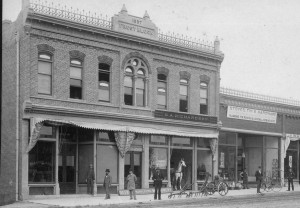 Then, in 1876, his doctor told him that his lungs were still not strong enough for the weather in Maine, and that he needed a warmer, drier climate in order to survive. So, Frost sold his pattern business and moved west to Pasadena.

Once in Pasadena, he engaged in various businesses, including a photo studio. He built a row of buildings along Colorado, and began to socialize with the other local veterans.

In 1885, when the veterans began to organize a local Grand Army of the Republic Post, Frost was one of the charter members.  He was the one who suggested they name the post in honor of the recently-deceased John Godfrey, who happened to be another Maine man. 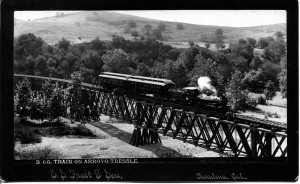 By the time of his death in 1894, Frost held an unusual distinction.

In California, he was known for selling magnificent photos of various views of southern California. Due to the practices of the day, the images were not labeled as to who the actual photographer was. Frost was not known as a photographer himself, although his son had received training in taking and processing photos, so some of the photos might have been the “son” of “Frost and Son.” Others were probably taken by local photographers who then sold the negatives to Frost, to make prints commercially available.

In New England, though, Frost was still known for his hooked rug patterns. In fact, the company that he founded continued in business in one form or another for well over a hundred years, and rugs made from his patterns are still famous. Museums in New England, and especially in his home state of Maine, have done exhibitions highlighting these patterns and the rugs made from them.

Thus, on both coasts he was famous for wildly different reasons, and this exhibit may be the first time that his two careers have been highlighted together.