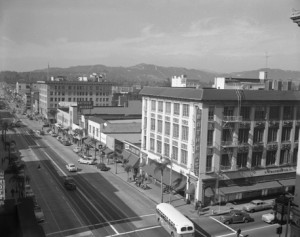 My chariot to freedom arrived in the form of a jalopy. I had turned 16 in July and my driver’s license was aching to go for a ride. I signed papers and handed over $20 I earned at my summer job in the purse department at the May Company. The seller peeled rubber as he sped out of sight in another car. I found myself the owner of an old clunker that drank a quart of oil every week and most of the time didn’t start. The radiator always had to be topped off with water. But I liked the independence that old bucket of bolts gave me. I named it Hellzapoppin’!, the name of a 1941 musical. Sometimes we called the car Hellz and sometimes we called it Poppin’.

The starter was shot. I told my sister Linda, and the other little kids in the neighborhood, I’d give them a ride on the running boards if they’d bring me a quarter and a push. Once Hellz was started with a pop of the clutch, the kids climbed on. Riding up and down Carroll Drive was every bit as fun as hanging on the side of a San Francisco cable car.

But most of the time I parked my car on the adjacent street where there was a slight slope, making starting easier to accomplish alone. I pushed it myself, jumped back in and popped the clutch. The engine belched an un-mufflered growl that said, Look out, here I come!

Cruising Colorado Boulevard in Pasadena at night became a favorite thing to do with my girlfriends. I was the only one in my clique who had a car. Sometimes we stopped at the new restaurant, “McDonalds”. It sported “Golden Arches,” and a sign at the curb that gave a daily count of burgers sold. More often, though, we chose the drive-in restaurant Bobs Big Boy. A pony-tailed carhop wearing a perky outfit and roller skates, took our order. We listened to our favorite music from the restaurant’s speakers, such as Bo Diddley, Tutti Frutti, Hand Clappin’ and Mary Lou. There was also a new singer, Elvis Presley. His just released songs were Love Me Tender, Don’t be Cruel and Hound Dog. We ate, gossiped, giggled and sang. Metal wheels on her skates announced the carhop’s arrival with a tray she hooked on our lowered window, loaded with our burgers and fries, Cokes or shakes. 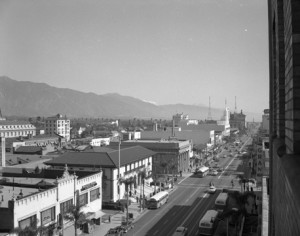 With a thrill of anticipation we pulled out onto Colorado. Driving very slowly, we flirted with boys in cars who were headed in the opposite direction, cruising with the same purpose as ours. The five of us felt irresistible. Because we were safe, we were boldly sassy. The boys were so happy to think they were desired, sometimes they hung out of their windows as if they could actually pursue us. They must have thought they were irresistible, too.

One evening, we drove through a construction area on the street. Lighted red kerosene lanterns outlined the area where asphalt was torn up.   Mary opened the door, jumped out and grabbed one of the lanterns. Then she hung it on the sun visor. “Now we look like we’re from the “red light district,” she said. We squealed with delight. When Judy spotted a police car, she quickly covered the lantern with her black sweater.

On our last cruise of the summer we pulled side by side with a car full of boys, flirting as usual only a few feet apart. A boy in the back seat dropped his pants and mooned us. Stunned, we quickly turned away, just in time to watch Hellzapoppin’ collide with the car in front of us. The other car’s bumper fell off with a clatter. The driver got out, didn’t as much as look our way, put the bumper in his trunk, and drove on.