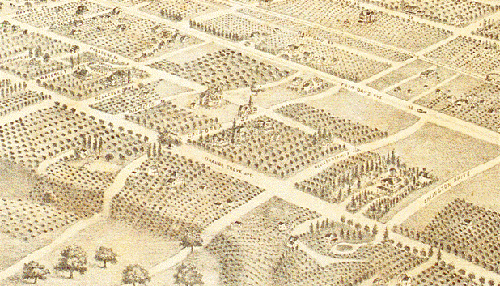 On August 25, 1886, a Pasadena newspaper reported that “Pasadena, the new-born Garden of Eden, has been lithographed in fine shape.” West Pasadena in 1886 was still surrounded by orchards and vineyards, and a visitor in April wrote that “the air is loaded with fragrance.”

When Pasadena was incorporated as a city in June, 1886 it was experiencing the beginning of a real estate boom that would transform it from its rustic beginning as an agricultural community in 1874. The business center at the intersection of Colorado and Fair Oaks was expanding, and new homes were being built everywhere. Yet much of Pasadena was still rural in character.

One early resident wrote of his home on South Fair Oaks “We did not have electric light or gas. Our home was heated by kerosene lamps and the cooking was done on a wood and coal range. In those days there were no paved streets and many of the streets did not have sidewalks, curbs or gutters. There was no sewerage system and the houses had to have cesspools.” 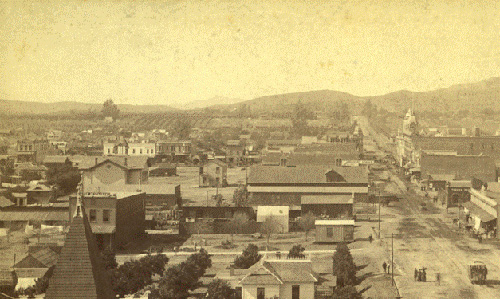 Looking west on Colorado Street in 1886. A horse-drawn streetcar is at the lower right of the photo, and orchards can be seen on the Orange Grove avenue ridge.

Animals were part of daily life, and many people kept cows and chickens, as well as horses.  Horse-drawn vehicles and bicycles were a means of transportation, “but walking was a common way of getting places.” Ralph Arnold, who lived near Orange Grove avenue, wrote of his burro, Ginnie:

“Ginnie liked to eat at 5:00 A.M. and if no hay was on hand made her hunger known by a series of raucous brays which woke up the whole neighborhood. I used to try to stop her by rushing out in my nightgown (everybody wore nightgowns in those days) and belaboring the poor beast with a lath.  But I never quite cured her of braying. She would not drink water out of a pail so I had to ride her down to the Arroyo to drink from the stream.”

A burro might not want to drink water out of a pail, but schoolchildren did. A girl who attended the Grant School at the northwest corner of Allen and Colorado recalled:

“Water was carried in a tin pail from a well pumped by a windmill on a ranch across the street. A tin dipper served as the drinking cup and on warm days the pail was passed around and each pupil drank in turn. I have no memory of this dipper ever being washed, to say nothing of being scalded!”

The above memories are from a special edition of the Pasadena Community Book published in 1955. Comparing the world of 1955 to the 1880s, Alice Marston Hastings wrote:

“The poppyfields are gone and the meadow larks and the orange groves, and with them the friendly country ways of living. Instead of peacefully driving our horses, we speed in our automobiles, for we seem to be a people of rush and hurry. True, we have many and wonderful modern inventions to give us pleasure and help in our daily living, but in spite of all of them, if I could choose, I would step back into the 1880 years and the simple way of life – that charming period in the early days of Pasadena.”

This article was originally published in the Summer 2011 issue of West Pasadena Residents’ Association’s The News.