A Closer Look at Thaddeus Lowe

Civil War balloonist Thaddeus Lowe was born on August 20, 1832 in Jefferson, New Hampshire. His full name was Thaddeus Sobieski Constantine Lowe, and with little more than a grammar school education and an unquenchable thirst for science, he built what was for many years the world’s largest balloon to attempt a trans-Atlantic flight. Eventually he held more than 200 patents, heated and illuminated nearly two-thirds of all the homes in the United States with his “Lowe Gas Process,” developed ice-making machinery, and built a railway in Southern California’s Sierra Madre (now San Gabriel) Mountains called the Mount Lowe Railway. 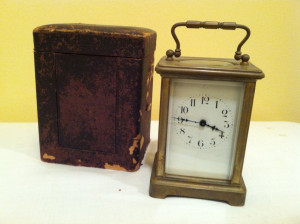 Being from Pilgrim stock, with traceable lineage to the Mayflower, the Lowe family farmed for many generations and was always involved in community service or activism. His father, Clovis Lowe, was a drummer boy in the War of 1812 at twelve years of age. The Lowe family continues to live in New Hampshire as well as throughout the New England area.

As a young man, Thaddeus believed that at some altitude the wind always blew from west to east and had a burning desire to prove it. His idea was to build a balloon large enough to cross the Atlantic Ocean and demonstrate his hypothesis. By 1855 Lowe had met and married Leontine Augustine Gachon, a French expatriate who spoke broken English but had a great admiration and love for Thaddeus. Leontine was a very intelligent woman and fully supported her new husband’s desires for lighter-than-air flight, including helping him sew envelopes for his balloons and experiments. Together they planned and outfitted a balloon, the City of New York, which attempted to fly in November of 1859. Sadly, the balloon envelope was so heavy that even the gas-works for the city could not supply enough pressure to fill the envelope, which kept collapsing under its own weight. 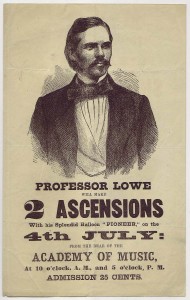 Thaddeus Lowe Balloon Ascension Handbill dating from 1860, for rides in the balloon “Pioneer” from the Michael Patris Collection, currently on display at PMH

Undaunted, Lowe sought a bigger source of gas and found it with the assistance of John Cresson, chairman of the board of the Point Breeze Gas Works in Philadelphia. Cresson was also an influential member of the Franklin Institute, where Lowe eventually became a member. Winter brought inadequate flying weather, so the balloon project was stored until the spring of 1860. Horace (Go West Young Man) Greeley suggested a name change for the balloon to the “Great Western” as the world’s largest ocean-going vessel, the “Great Eastern,” was en-route from England to the United States. Equipment failure of the balloon envelope precluded Lowe from flying after two unsuccessful attempts during 1860, so again the balloon was stored until the spring of 1861.

By this time Joseph Henry, head of the Smithsonian Institution, became aware of Lowe’s trans-Atlantic aspirations and threw out a challenge. Lowe was to take his balloon somewhere west of Pennsylvania, wait until the wind was decidedly blowing from east to west, and then fly the balloon to the east coast. Following the success of this experiment, Lowe would be able to count on some sort of governmental assistance in his future ballooning endeavors. Lowe took up the challenge immediately and waited in Cincinnati, Ohio, for several days before finding adequate weather conditions.

Lowe did, indeed, fly his smaller balloon “Enterprise” from Ohio. However, instead of landing somewhere in the north-east, he landed in Unionville, South Carolina… two days after Virginia had seceded from the Union. The balloonist was placed under house-arrest as being a “Yankee spy” but was soon released as the president of the local university was aware of Lowe’s trans-Atlantic aspirations, which now came to a permanent end with the outbreak of the Civil War. An unintended result of this flight is Lowe unofficially held an air speed record of approximately 900 miles in nine hours; a record which would stand for years. In 1931, Lowe’s granddaughter, Florence “Pancho” Barnes, would also hold an air speed record, beating out renowned aviatrix Amelia Earhart.

Mr. Patris is the curator of Thaddeus Lowe: Chief Aeronaut of the Union Army.