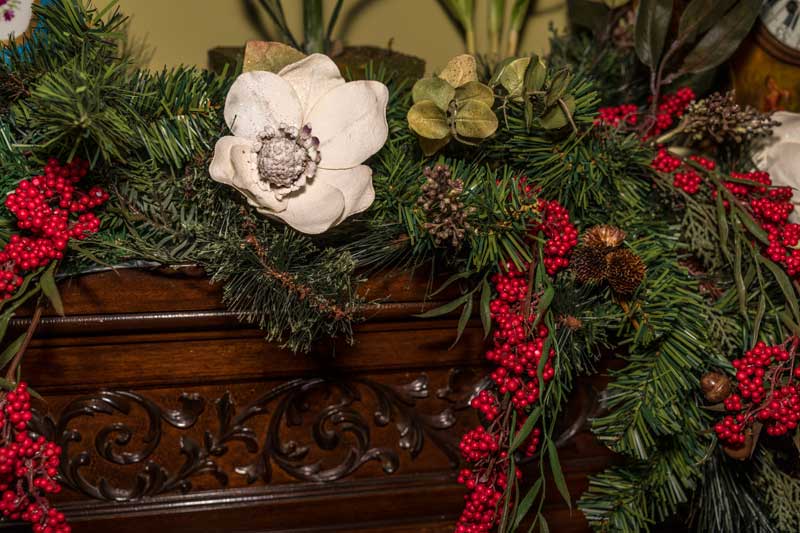 Detail of the fireplace mantle in the Fenyes Mansion Drawing Room. Photo by Marlyn Woo/Joanne Wilborn.

‘Tis the season to be decorating – and gifting friends and family with tokens of our love and appreciation, often in the form of plants and flowers. As we hang a wreath, put up an evergreen tree, or place colorful blooms throughout our homes, we are not just enhancing the visual space. We are sending messages of hope and good cheer, love, admiration, and wishes for good fortune.

Holiday decorating as we practice it today was popularized during Victorian times, although many of its elements were adapted from centuries-old practices originating in many cultures. So let’s turn back the clock and, using the period-appropriate holiday embellishments now on display in 1906 Fenyes Mansion as examples, explore the deeper meanings embedded in some of these cherished customs. 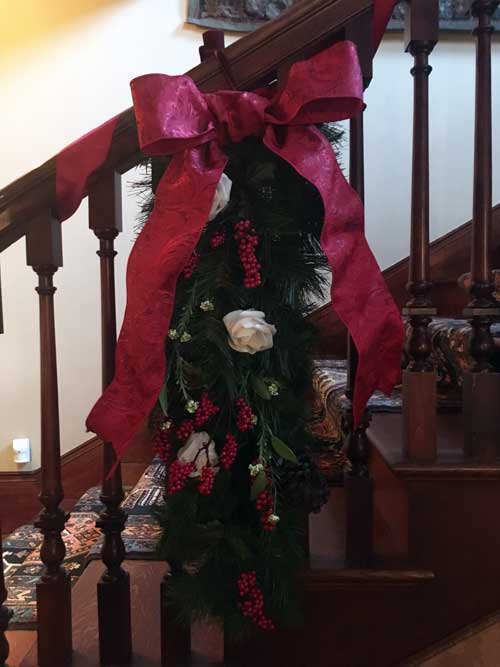 Swag on the grand staircase in the Fenyes Mansion. Photo by Michelle L. Turner

Entering Fenyes Mansion you are greeted by the imposing staircase, draped for the season with swags of greenery, berries, flowers and ribbon. The first reports of people bringing holly and pine branches into their homes date from the late Middle Ages. Live green branches – symbols of life in the cold and dead of winter – were placed on windows, mirrors, and in vases. It was believed they kept evil spirits away. Evergreen ropes (garlands) were draped over staircases, railings, mantels, picture frames, and along ceilings.

The wreath has a long history and many religious associations dating back to the ancient cultures of the Persian Empire. Originally the circlet was called a “diadem” and took the form of fabric headbands, which were sometimes adorned with jewels. Beginning in 776 BCE, wreaths made of laurel leaves were used to crown victors of Olympic Games. Later, when the Games began to move to different cities, each host city would award head garlands made of branches of local trees.

In ancient Rome, people used decorative wreaths as a sign of victory and celebration. The custom of hanging a wreath on the front door probably came from this practice. In Europe, people would put wreaths on their doors to identify their homes in the same manner that house numbers are used today. Christianity adopted the wreath as a symbol of immortality.

The use of evergreens and wreaths as symbols of life was also an ancient custom of the Egyptians, Chinese, and Hebrews, among other peoples. Mistletoe, holly, and evergreens were favored in medieval times, as they were believed to possess mystical qualities to ward off evil spirits. 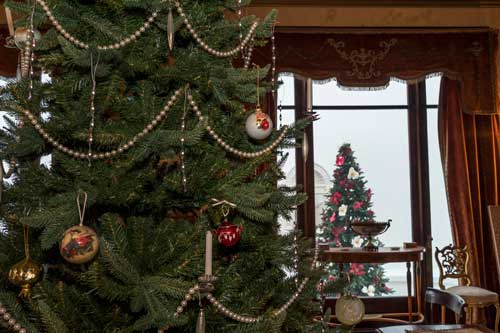 Christmas Trees in the Drawing Room and Solarium of the Fenyes Mansion. Photo by Marlyn Woo/Joanne Wilborn.

The evergreen tree, likewise, was long a symbol of continuing life in the midst of winter, but early Christians were chastised for following the “pagan” practice of bringing trees and greens into their homes. By the Middle Ages legends of the Christ Child’s birth in the dead of winter and the ensuing re-greening of the landscape, along with softening attitudes towards cultural practices, led to wider acceptance of this seasonal décor. By the sixteenth century trees began to be used as a symbol of Christmas and used in “Paradise Plays” depicting both the Nativity and the story of creation. Whether or not Martin Luther truly “invented” the Christmas tree, the popularity of bringing the tree inside the home specifically for Christmas and using it as the centerpiece for the giving of gifts to family and friends definitely began in Luther’s day.

When Queen Victoria of England married Prince Albert of Saxe-Coburg-Gotha in 1840, the decorated Christmas tree he brought with him swept the British Empire – and subsequently America.

Look for Edwardian Christmas Décor: Part II, which will post on December 13.

Experience the elegant 1906 Beaux Arts Mansion with your relatives and friends on a one hour and fifteen minute docent-led tour this holiday season. From now through January 7, 2018, Edwardian style Christmas trimmings embellish the original furnishings downstairs.