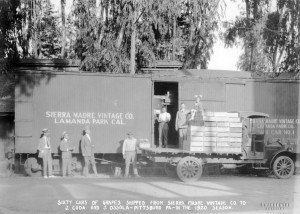 Last week’s column may have given you the unfortunate idea that old soldiers simply died in bed, of old age or disease, or both. While many Civil War veterans did die of natural causes, there were plenty of exceptions. In a few cases, their deaths were unusually newsworthy as the aging soldiers interacted with the rest of the world and with the wonders of modern technologies.

Albert Brigden was one of the most newsworthy. He worked for the Sierra Madre Vintage Company, a winery in Lamanda Park, which was then a separate town just east of Pasadena. The wineries in this area were known for the production of a fortified wine called Angelica. The production of this wine involved distilling, since the winery needed to increase the natural percentage of alcohol in the wine.

In October of 1894, Mr. Brigden was working with the company’s barrel maker on a scaffolding above the large wine vats. An engineer down below was injecting steam into the distillation system when something went horribly wrong. There was a steam explosion powerful enough to lift both Brigden and the other man up into the air, and then drop them twenty feet to the floor below. From the news reports, Mr. Brigden received third-degree burns from the steam, but amazingly was not hurt from the fall. He was able to run to the winery’s office to get help before collapsing. The other man recovered, but Mr. Brigden died the next day from his burns.

There were at least a few cases of old soldiers committing suicide. A. D. Yocum had survived bouts of depression while still married, but after the death of his wife, he went to her grave at Mountain View cemetery and killed himself there after pinning a note to the ground with his knife. The note read:

“I am sorry to shock the moral sense of my friends by this seemingly rash act, but sixty years of relentless conflict with adversity has rendered me incapable of further usefulness in the world, physically and mentally. My recent sorrows and bereavement have crushed me, utterly. May God forgive my sins and rest my soul in peace. Dear Alice and Oscar, good-bye. I go to take up the new life with mama, upon whose lonely grave I shall soon expire. I loved her as few people have ever loved before. 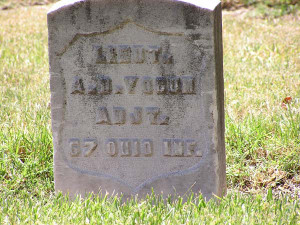 “Brother J.D., farewell. I feel deeply for you. I know you will say I am insane. I will not deny it. I fear an asylum.

“To all, farewell! May God’s grace prove ample in this hour.

His brother, J. D. Yocum, was an early pioneer in the Linda Vista area and also one of the early professors at Throop, which later became Caltech.

Other causes of death were many and varied. One died in a gunfight over a mining claim (remember, this was still the “wild west” in the late 1800s), and another veteran simply died of bad judgment while trying to repair his roof on a hot day and collapsing there. A third learned that you can’t teach an old horse new tricks, and while trying to get the horse accustomed to the sounds of a local train, the horse panicked and caused a fatal wagon crash.

Whether their deaths were mundane or outrageous, they were newsworthy because of who they were and what they had done. Even if their lives since the war had been simple and mundane, at the end they were treated like celebrities.