Rescued From a Rental Car: Memories from the Bell Family 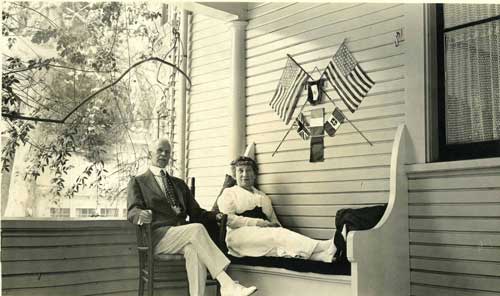 Congressman Bell and his wife Elizabeth relax on the front porch of their St John home. Note the service flags honoring their son Kenneth’s participation during the war. The picture was taken in 1918. (Special Collections, CWB 1-1-1)

In 2009, PMH received a small package of materials the sender had found in a rental car and enclosed a note saying, “You might like to have these.” After a period of time a volunteer finally got to the project and discovered that it consisted of old newspaper and magazine clippings and a few photographs of a house with two people standing in front of it. Fortunately, the couple had written on the back of the photos. Careful investigation revealed the names of the subjects in the pictures and the address of the home. They turned out to be United States Congressman Charles W. Bell and his wife Elizabeth. Included in the cache of materials was a newsletter from the local VFW post from 1930, two obituaries that revealed the mystery of the rescued collection, and several newspaper cartoons and humor magazine features with World War I themes. Here is the story that this material revealed.

Growing up in Pasadena and living on St John Avenue, Kenneth Bell attended Garfield School just around the corner on California Street. Later, he would attend Pasadena High School. His father, U.S. Congressman Charles W. Bell, was a Pasadena pioneer having come to Pasadena in the 1870s and acquiring several acres of land. He later purchased land just behind Governor H. H. Markham’s home and built a house at 726 St John where he raised his family. After high school, Kenneth enrolled at Lafayette College in Pennsylvania. Moving back to Pasadena, Kenneth took a position at the First National Bank. In 1917 with war clouds looming over the country, Kenneth joined the United States Army and was sent to Berkeley, California, for training in aviation. His record was exceptional, and he completed a three month’s course in three weeks, and was one of the ten honor students at that time. He was sent to Italy for more training and shortly afterward went to France. As part of the 28th Aero Squadron, 3rd Pursuit Group he saw much action over the front line trenches. In the meanwhile Kenneth’s family decided to send their son a package of family memories with several snapshots of Congressman and Mrs. Bell in front of their home on St John. Included were several of Kenneth’s favorite comic strips like Mutt& Jeff and excerpts from humor magazines, all with war themes. 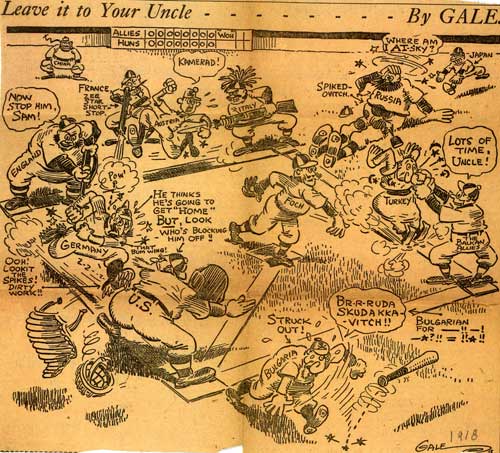 Here is one of several cartoons the Bells sent to their son during the war to amuse him and his friends. (Special Collections, CWB 1-5-1) 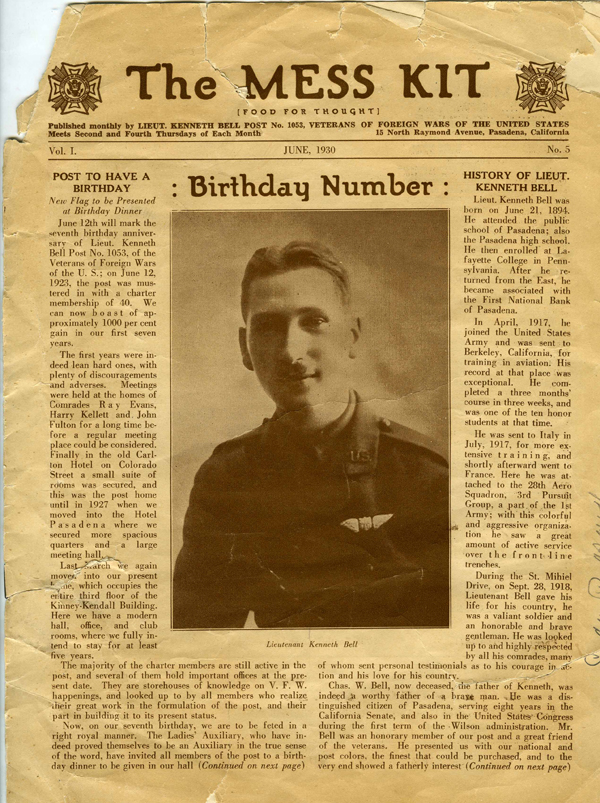 Lieutenant Kenneth Bell featured on the cover of the June 1930 VFW post newsletter. This Pasadena Veterans of Foreign Wars post was named after Lieutenant Bell honoring him for his bravery in the First World War. (Special Collections, CWB 1-2)

Unfortunately, Kenneth Bell’s life was cut short when after volunteering for a very dangerous mission to shoot down an enemy observation balloon, he collided with his friend and fellow volunteer in a mid-air accident. Back in Pasadena, his parents received many letters and telegrams of tribute and regret for the loss of their brave son. A very special honor was bestowed on Kenneth Bell when the Pasadena Veterans of Foreign Wars of the United States Post No. 1053 named itself The Lieutenant Kenneth Bell Post by which it is still called.