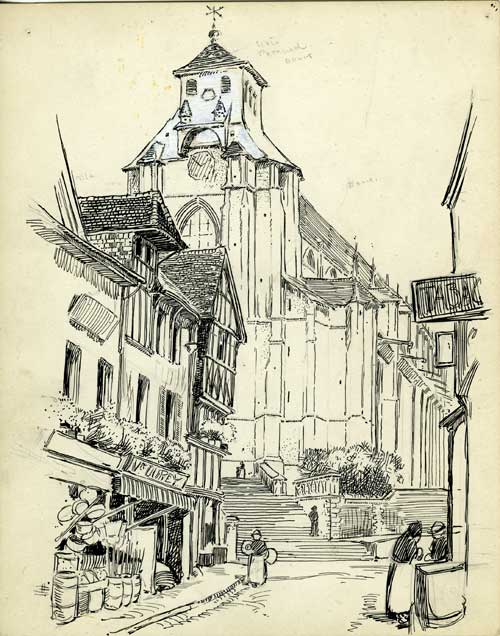 Ernest Batchelder is renowned for the distinctive softly-hued tiles his firm produced during the early twentieth century.  These tiles, which adorn public, commercial, and private buildings all throughout North America, are icons of the American Arts & Crafts movement.  But, while his work has been extensively studied and exhibited, much less is known about the founder of the tile company that produced them. A donation to Pasadena Museum of History may help scholars and collectors learn more about Ernest Batchelder and his family.

In 2016, soon after Dr. Robert Winter donated his collection of Batchelder tiles and research files to PMH, the Museum received another generous gift.  The Batchelder family descendants decided to also give the Museum their personal collection of family papers relating to their famed relative.

The collection is a trove of albums, business records, correspondence, books, photographs, and more.  Volunteers in the Research Library and Archives have since been working on organizing the collection and making it accessible to the public.  The eventual goal is to publish the finding aid for the collection on the Online Archive of California, so that researchers worldwide may have access to it.

Recently, one section of the collection has been catalogued and safely rehoused in archival storage containers.  It consists of 116 sketches made by Ernest Batchelder. More than half of the sketches are from his travels in Europe in 1905.  Other sketches are without any kind of identifying information, although with further study, several can probably be identified.   The various media used includes pen, pencil and colored pencil, and watercolor.

Batchelder must have made thousands of sketches during his lifetime, of which very few survive.  Clearly the sketches he saved from his European travels were prized by him. He was twenty-nine years old at the time of his first trip abroad in 1905.  His passport application describes him as being 5’4” tall, with a high forehead, small mouth, and dimpled chin. He had only been teaching at Throop Polytechnic Institute for a few years as an Instructor in Grammar School Drawing and the Sloyd Method when he took this leave of absence to visit Europe. Presumably, Throop thought highly enough of their teacher to grant the leave…on his return, he was appointed head of the art department at the school.  He went abroad again in 1908, but none of this group of sketches are dated from that year.

The European sketches tend to be cityscapes or landscapes.  The focus appears to be primarily architectural, with many sketches depicting medieval structures. The first forty sketches were done in England in August and early September of 1905, primarily in the area around the Cotswolds.  Batchelder studied at the Handicraft Guild in Chipping Campden and made many excursions into the surrounding countryside and market towns such as Broadway, Stratford, Warwick, Worcester, Oxford, and Burford. He wrote on one sketch: “Note infinite peace & quiet brooding over Broad Campden.  Broad field of ripened grain in far ground – distant hills glowing with slanting rays of setting sun – touching the sheep feeding there…” 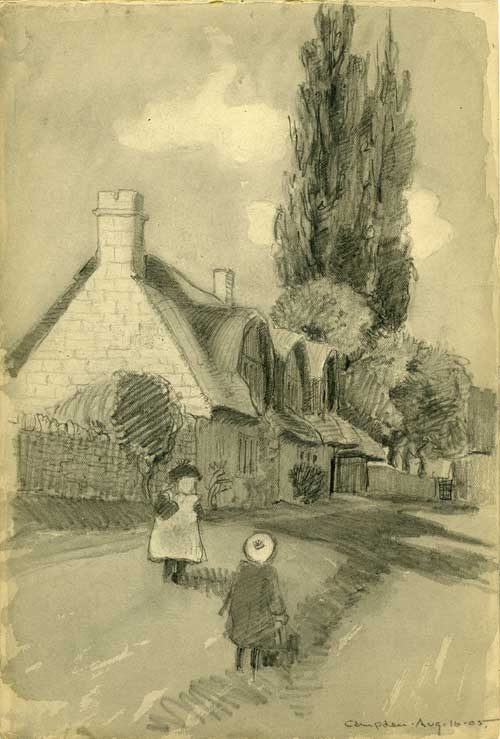 From the English Cotswolds, Batchelder next travelled to the Continent in late September.  There are a dozen sketches from Bruges, Belgium done between September 20-24, most depicting the distinctive stepped gable architecture of the city’s buildings.

These locations remain picturesque to this day.

A 2008 photograph of the famed thatched cottages of Campden, England by Bob Radlinski can be viewed on Flickr.

A modern photograph of a Bruges streetscape by adonisabril from 2018 can be viewed on Steemit. 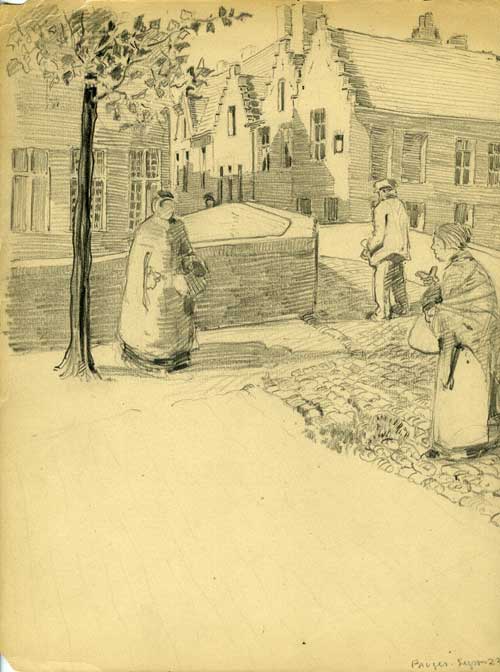 After Bruges, the next several sketches are dated September 26 in Ypres, Belgium and then September 27-29 in Amiens, a city in northern France.  There are two sketches of Paris dated from mid-October. Although Batchelder is said to have travelled onto Germany and Italy, no other sketches in this collection are identified with those locations.  The dated sketches that do survive from his travels underscore his deep interest in and knowledge of European design and architecture.  They showcase his strong talent in drawing, a talent that Batchelder is not often celebrated for. As work continues on the Batchelder Family Collection, hopefully more information will be revealed that allows us to appreciate the full range of his artistic abilities.

With thanks to researcher Sue Anderson who uncovered Batchelder’s passport records and volunteers Danielle New and Sophie Phinney who carefully listed and rehoused all of the sketches. 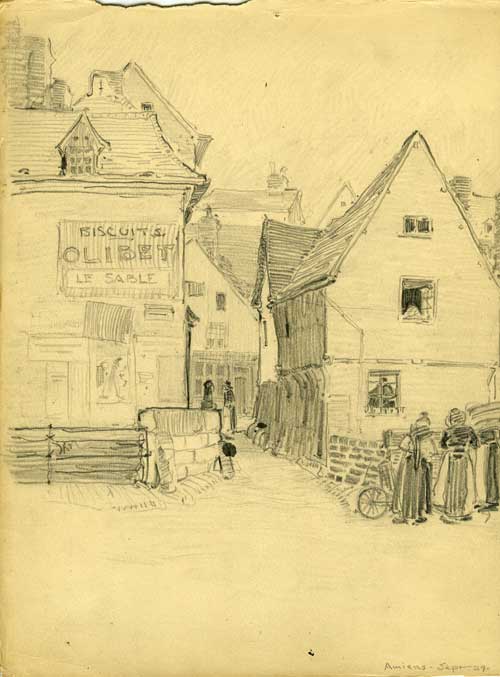 Ernest Batchelder is featured as one of Pasadena’s early entrepreneurs in the current exhibition, Starting Anew: Transforming Pasadena, 1890-1930.