Back Up the Train!

A Correction and Additions to “All Aboard! Riding the Rails with Colonel G.G. Green.”

Where Did Philip Armour Live? Pasadena or Altadena? 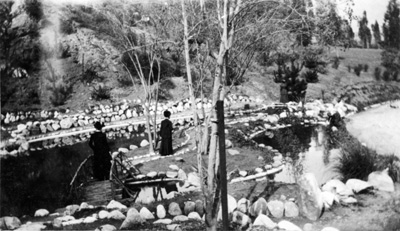 Soon after my blog was posted about Colonel Green’s private railroad car, I realized I may have mistakenly written that the Armour family lived in Altadena. Striving for historical accuracy, I wanted to correct my statement if it was wrong. With the help of one of the museum’s amazing volunteers, John Fode, the answer was found. The 1900 Pasadena Directory recorded “Philip D. Armour” living at 320 W. California. His son’s widow, “May Armour”, was living at 1201 S. Orange Grove Avenue (the northwest corner of Orange Avenue and Columbia). Earlier directories indicate that Willam C. Stuart lived at this location in 1895 and 1897. By 1905, the residence was occupied by L.V. Harkness.

In the process of this additional research, I discovered that Phillip D. Armour, who established the well-known Chicago meat-packing business, also had an interesting connection to the railroad industry. In 1883, he established the largest private refrigerator car fleet in the United States. By 1900, the Armour Refrigerator Line had over 12,000 cars and they were built in a factory owned by Armour. Those cars were painted yellow- Armour Yellow. Armour yellow went on to be one of the official colors used on Union Pacific railroad cars today.

Perhaps we can speculate that Colonel Green and Phillip D. Armour had conversations not only about their mega businesses but also their common interest in trains.

Where Did Green park his train car and whatever happened to it? 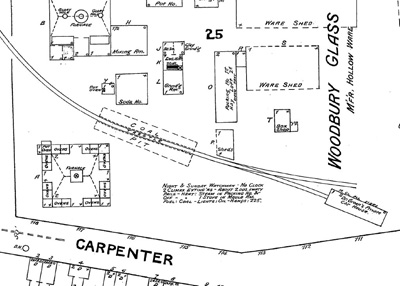 Sanborn map of the Woodbury Estate

The town of Woodbury, New Jersey, was the home of Colonel Green’s factory where his patent medicine August Flower and Dr. Boschee’s German Syrup were manufactured. In addition to the medicines, Green established several businesses that supported the factory. There was a glass factory, a laboratory and truck works. He also financed the construction of many other buildings, homes and streets in Woodbury. Today, the Woodbury New Jersey Village Green Preservation Society is dedicated to preserving the town’s historic buildings and streets.

I reached out to this organization to see if they knew more about Colonel Green’s train car- where it was kept and what happened to it? Within a day, I received some answers. A Sanborn map from 1897 shows the exact location of the building where the car was stored next to his glass factory.

I also received copies of several Woodbury Daily Times newspaper articles that announced Colonel Green’s departure for California. On November 17, 1903, the paper reported that Green was leaving on his 18th trip to California.

The question of what happened to the train car is still unanswered. However, the same newspaper provided a hint of what was to come. On July 2, 1918, it reported the railroad spur that ran into Colonel Green’s private car barn at the former glass house on Green Avenue was to be taken up and used elsewhere. It concluded by saying: “Colonel Green’s car will either be sold or stored.”