Batchelder tiles inspired Cha-Rie’s tile career. According to a 2013 article in the Pasadena Star-News, Cha-Rie “owns one of the largest collections of Batchelder molds in the country” and “has been making Craftsman-style relief tiles for about two decades, the first ten years she was doing so in secret.” She was nervous about using Batchelder designs without the approval of his heirs. Now Cha-Rie produces revival tiles with the blessing of both the Batchelder family and Robert Winter. She is excited to help PMH celebrate Robert Winter’s recent donation of his Batchelder collection by producing the tiles for PMH’s Commemorative Tile Campaign. 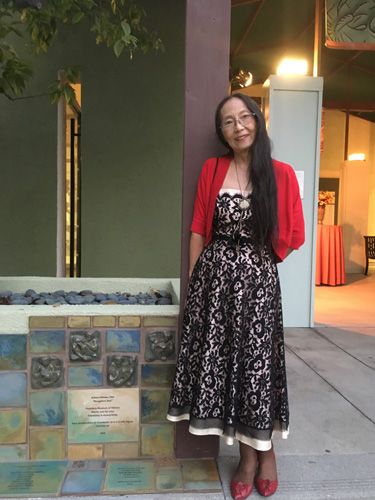 Cha-Rie Tang was trained as an architect, received Bachelors of Science in Art and Design from M.I.T., Masters of Architecture from University of Colorado, Boulder. Along with practicing architecture, she has explored many related fields including interior design, architectural rendering, computer graphics, publishing CD-ROMs of 19th century design books that won the team nomination for the Macworld Smithsonian Award, ceramic tile fabrication, and glass fusing. One of her specialties is making high relief ceramic tiles. It started with reproducing 3-dimensional historic Arts and Crafts tiles. Sculpting original designs soon followed. Now she enjoys executing commissions for custom wall murals, fireplace surrounds, and fountain walls.

Cha-Rie’s drawings are exhibited on buses for the City of Pasadena, lobby of Community Bank, and the Pasadena Building Department.  She had designed four colorful tile murals and orchestrated public participation in glazing them at Mission Viejo. Her multi-layers fairy tale glass pictures, “Windows in a Forest of Wonder,” are installed in the Exposition Park Library for the City of Los Angeles. “Unity Through Diversity,” a series of twelve glass panels, is the theme for the County of Los Angeles Administrative Offices. She has taught glass fusing at Art Center at Night. A recent installation is the Foothill Gold Line Extension Monrovia Station. Under the title “River of Time,” Cha-Rie incorporated casts of historic tiles, original designed relief tiles, meandering “watercolor tiles,” a natural sculptural rock carved by thousands of years of water, and ripples of glass in a narrative that speaks of geologic time and human time at the juncture of a train station where one is critically aware of the displacement of time and space.

You are encouraged to explore the art installations at the stations along the recently completed Foothill Gold Line extension. Take special note of the Batchelder inspired installation by Cha-Rie (mentioned above) featured at the Monrovia Station. Visit Art of the Journey at art-tour.foothillgoldline.org to learn more about the artwork.