History of the Arroyo Seco Parkway Preserved in Museum’s Archives 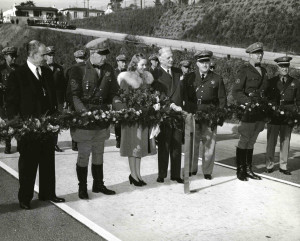 The Arroyo Seco Parkway was officially dedicated on Dec. 30, 1940 and opened to the public the next day — just in time to handle the crowd of motorists traveling to Pasadena for the Tournament of Roses and Rose Bowl game. The new, six-lane, landscaped, toll-free highway — one of the first freeways in the nation — was expected to speed traffic between Pasadena, South Pasadena and Los Angeles, promising commuters they could travel from Pasadena to downtown Los Angeles in no more than 20 minutes.

Invitations and programs from the dedication ceremony, as well as photos, freeway maps, and carbon copies of parkway-related correspondence, can be found in Pasadena History Museum’s archives. This collection of ephemera relates the story of the freeway’s construction.

Plans to build a road through the Arroyo had been proposed since the 1890s. In 1913, the Los Angeles Park Commission published a brochure in which it outlined a plan to construct a parkway connecting Pasadena and South Pasadena with the portion of the Los Angeles River near Elysian Park. The brochure, included in the Museum’s collection, focuses on the need to create additional parks in the Los Angeles portion of the Arroyo and maintains the proposed parkway would make these parks accessible to motorists. 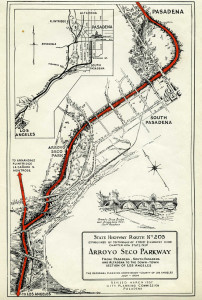 By 1931, Pasadena city officials had approved a different parkway plan. The Pasadena Park Protection Association, however, objected to this proposal. In a letter in the Museum’s archives, one city resident argues the highway would “destroy the beauty of the Arroyo,” require that homes on Arroyo Boulevard be demolished to widen the street for traffic entering and exiting the parkway, and pollute the area with “monoxide and noxious gases” from automobiles. 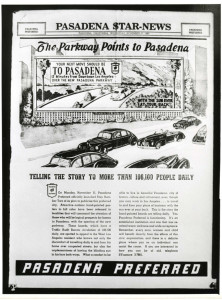 But another organization, Preferred Pasadena, supported the parkway and launched an advertising campaign to encourage home buying in the city, a convenient commute for people who worked in downtown Los Angeles. One ad, published in the November 27, 1940 issue of the Star News proclaimed the parkway would “appeal to the West Los Angeles resident who knows not only the discomfort of traveling daily to and from his home over congested streets but also the unpleasantness of having the blinding sun in his face both ways.”

Parkway construction began in 1935, and the initial six miles of the nine-mile route were completed in 1940. A photograph (top left) from the dedication ceremony shows two participants, Governor Culbert Olson and Sally Stanton, 1941 Rose Queen. The new road ran from Pasadena to Avenue 22. A 2.2-mile extension, terminating near Elysian Park, was finished in 1943; the third and final phase, completed in 1953, connected the parkway to the four-level freeway interchange near downtown Los Angeles.

The Arroyo Seco Parkway demonstrates the transition in freeway construction before and after World War II. The portion of the road traversing the Arroyo is a scenic parkway, similar to the one proposed in 1913; but the portion through downtown Los Angeles resembles the more urban freeways that would characterize the post-war era. The American Society of Civil Engineers recognized the freeway’s significance in 1999, when it declared the parkway a National Historic Civil Engineering Landmark.