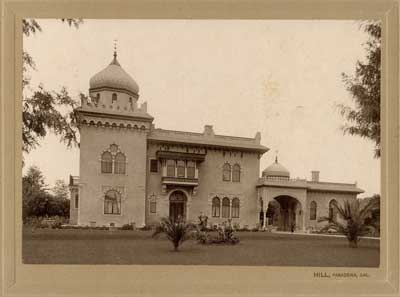 On the northwest corner of Orange Grove Avenue and Ellis Street in Pasadena, California, there once stood a mansion, exotic in style and unique to the neighborhood. This was the home of Eva Fenyes who came to Pasadena with her husband Dr. Adalbert Fenyes and her daughter Leonora in November 1896. Just months after their arrival, Eva bought an unimproved lot, actually two lots, from Mrs. C. E. Wood, also of Pasadena, on which to build her family’s South Orange Grove home. She hired the Los Angeles architectural firm of Dennis & Farwell to draw the plans for the house she herself designed. The exterior reflected her interest in Moorish architecture, and it expressed the pleasing decorative elements of that style in arched windows, spired domes, and subtle yet rich and colorful tile work. Her ideas came from years of study and travel in Tunisia, Algeria and Egypt, and she supported her vision with a well-chosen architect, Lyman Farwell. He was an equally seasoned traveler in the Islamic countries, and his knowledge and experience helped Eva create her Moorish mansion.

Using Eva’s preliminary sketches and her frequent input, Farwell worked on the plans throughout the early months of 1897. By May the blueprints were ready, and Los Angeles contractor John Pugh & Sons was hired to build the house. Work began in June, and for the next eleven months Eva and Farwell consulted and argued every detail of construction, finish work, and decoration. It is estimated that the house had thirty rooms each featuring a unique theme. Eva’s photographs and watercolor paintings reveal Louis XV, Louis XVI, First Empire, and American Colonial rooms, to name just a few. And it is from these images that we discover the soaring space she called the Algerian Court.

Eva probably styled her Algerian Court after palaces she saw in Algiers during the winter of 1891-1892. Her photographs from her travels reveal the influence, and comparing them with those of her Pasadena home, we see similar balustrades, pillars, and arches as well as hundreds of tiles decorating the walls above and between the arches. 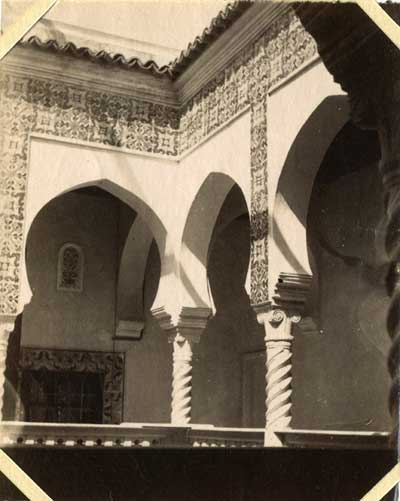 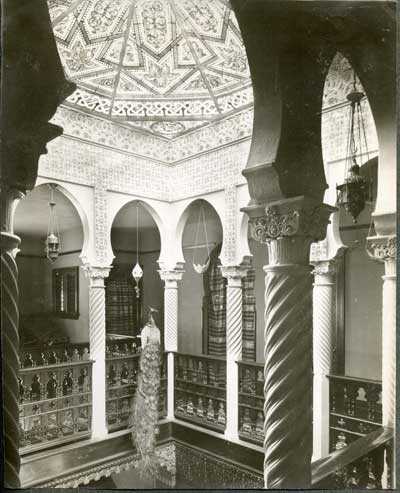 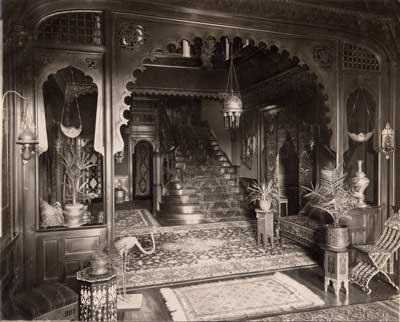 The staircase in the Middle Hall led to the Algerian Court. The peacock’s tail feathers can be seen center top. Circa 1897 (PHS1-21).

Eva further embellished her court with elaborate stucco cornices and Turkish lamps of varying style hanging from the center of each arch. On the railing of the second floor gallery she placed a finishing touch, a taxidermic peacock with its train of iridescent feathers cascading into the open space below, the room Eva called the Middle Hall.

The Middle Hall was a reception area bursting with a profusion of exquisite color, form, and texture. The furnishings Eva chose for this room were reminiscent of the salon at the Helouan Hotel near Cairo where she had met her husband Adalbert. We might imagine romantic memories influencing her choices when she purchased furniture, ornaments, and rugs from Los Angeles and New York importers and when she ordered special fabrics for the curtains, upholstery, and pillows directly from Egypt. We also might imagine Eva standing in the Middle Hall, in the midst of this lavish decor, looking up into the light of the open Algerian Court where an octagonal dome of opalescent and meridian glass hovered over the exotic scene. This enormous skylight was made by The Colonial Art Glass Company of Los Angeles, a company of artisans founded by brothers Walter H. Judson and J. Lionel Judson in 1893. It was Walter H. Judson who gave Eva the bid for her art glass dome. 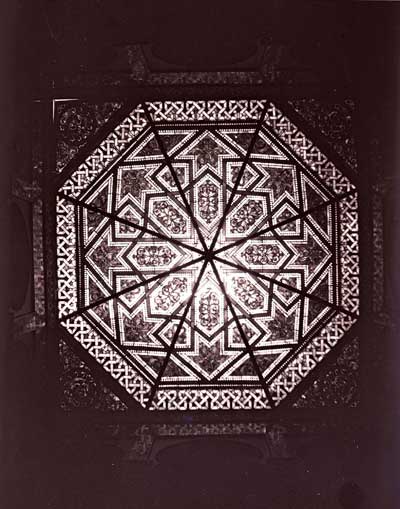 The bid dated July 21, 1897 estimated one dollar and fifty cents per square foot including installation. The skylight was set in place in October, and Farwell praised the company and their work in a letter he wrote to Eva. “I find them much more obliging than some of the older rivals in the business & far more artistic!!!” We don’t know the size of the dome, and we don’t know the colors of the myriad pieces of glass. But, Eva took a photograph of the entire skylight by aiming her camera straight up from the Middle Hall, and from this view we see the full dome in all its striking complexity. At the center we see the first of three concentric eight-pointed stars, the outermost touching its tips to a perimeter of eight panels that depict an intricate pattern of knots. Within each star, panels of floral design are outlined by strings of jewels and geometric forms. The longer you look at this window, the more patterns you see. The process of designing and making the eight identical triangular panels demonstrates extraordinary craftsmanship and inspired artistry. Of this magnificent, colorful art glass dome that illuminated the Algerian Court and Middle Hall only a few black and white photographs remain.

One of the photographs shows a mosaic of tiles decorating the walls below the skylight, between the cornice and the tops of the arches. The same tiles extend down between the arches to the tops of the columns. Two of these tiles have survived the years, and they help tell the story of the Algerian Court’s fate.

In 2006, the museum’s collections staff found a battered old shoebox marked “Old Tiles” in the attic of the Fenyes mansion on North Orange Grove Avenue. The box did in fact contain tiles, but at the time staff had no idea why the tiles had been saved or if they might be important. So they duly cataloged and photographed them, returned them to the old shoebox, and put them on a shelf where they remained for the next ten years.

Last year, one of the staff became interested in the tiled walls in the photograph of Eva’s Algerian Court. Taking a closer look, another staff member realized the tiles matched the tiles in the long forgotten shoebox. The tiles—old, cracked, and chipped—had once been part of Eva’s Algerian Court. Now the question became: how did they end up in a shoebox? With the tiles identified, information from two more sources in the museum archives answered the question. First, was an ephemera file that contains a newspaper clipping from the Los Angeles Times dated August 14, 1915. It reported an arson fire had destroyed the Moorish mansion. The owner at the time, Frank H. Hamilton, had used gasoline to burn the house for insurance money. Second, a photo negative found in 2010 in the wine cellar of the North Orange Grove mansion was identified as an image of the Moorish mansion after it had burned. The likely conclusion: when Eva learned about the fire, she went to see the burned remains. We can imagine her standing in the ruins remembering the days when her family had hosted intimate suppers and card parties as well as magnificent balls in the beautiful rooms now gone. And she probably thought about her decision to sell the house. They had lived there only seven years when she sold it to a family from New York. It was a timely decision. After all, when Leonora married and moved to Colorado, the house simply became too large for Eva and Adalbert. Now, as she and Adalbert walked around the ruins taking photographs, they spotted something in the ashes. Taking a closer look, they saw a pile of tiles that had survived the destruction of their lovely home. Adalbert sifted through the debris and selected two of tiles. Then he brushed them off and handed them to Eva as a memento of her beautiful Algerian Court and their family’s early years in Pasadena. 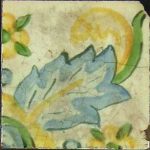 Of the burned mansion, one small part survived: Dr Fenyes’ office, the single-story building that stood across the porte cochère from the main house. It was moved in 1917 and it survives today, a private residence in the Linda Vista neighborhood of Pasadena.