Since 2000, Pasadena Museum of History has honored Contemporary History Makers for their contributions to our cultural community. On November 9, our 2019 Contemporary History Makers were honored at the California Club with a black tie cocktail reception and silent auction followed by a three-course seated dinner. More than 170 guests including business and community leaders, civic officials, educators, and friends attended this celebration. 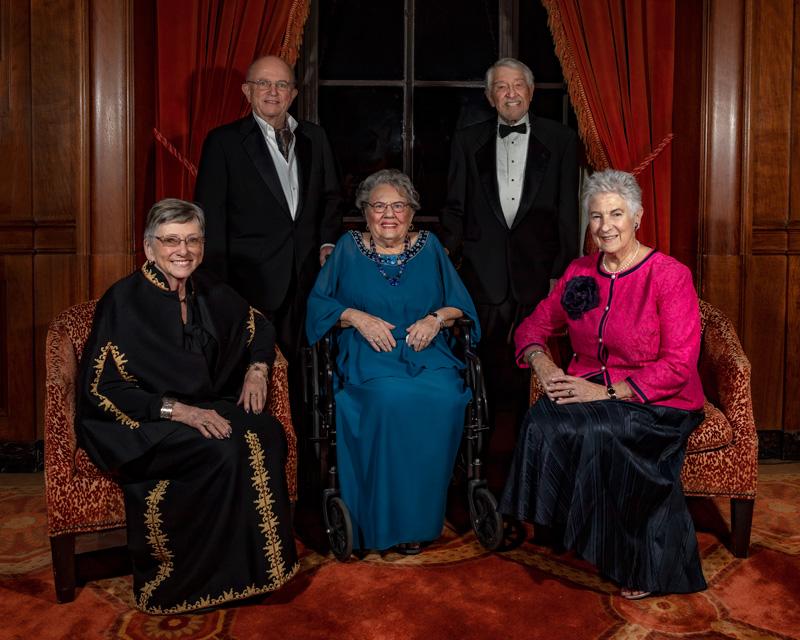 Six extraordinary individuals were honored as 2019 Contemporary History Makers for their shared commitment to our community in areas of civic service; dedication to supporting the arts, music, and education; and their involvement in the field of medicine.

Helen & John Baatz
Helen Baatz was born in Montreal, Quebec and graduated as an RN from the Montreal General Hospital. While raising a family, she felt a calling to gerontological nursing and returned to school. Helen furthered her career in the long term care field, obtaining a BS in Business and Management at the University of Redlands and a Master’s in Human Development at Pacific Oaks College. For her work at Monte Vista Grove Homes as Director of Nursing/Executive Director and at the State level, Helen was awarded a Meritorious Service Award by LeadingAge California. Her community associations include membership on the Boards of HMRI (Huntington Medical Research Institutes) and University of Redlands Alumnae, President of both Pasadena Opera Guild and University Club of Pasadena, Chair of the Twilight Club, and active membership in Pasadena Rotary. Also an avid reader, balletomane, and supporter of the performing arts, Helen previously served as a docent at the Huntington’s Virginia Steele Scott Gallery of American Art.

John Baatz (1939-2018) was born in London, England and spent his life as a successful businessman and in service to the communities in which he lived in his adopted countries of Canada and the U.S. After earning a BS in Civic Engineering at Montreal’s McGill University and a MBA (Gold Medalist) at University of Western Ontario, John had a distinguished career in the transportation industry across Canada. He also served as President of the Winnipeg Symphony Orchestra during this time, among other civic associations. In 1984, John became President of Tow Industries, which continues as a family business. His many civic and philanthropic pursuits included serving as a Trustee, and subsequently, President of Pasadena Museum of History, President of La Canada Rotary, and a board member of Glendale Adventist Foundation. John was also known as a British classic car enthusiast.

The couple enjoyed fifty years of marriage; they raised two children and have three grandchildren.

Mireya & Larry Jones
Mireya Asturias Jones was born in Quetzaltenango, Guatemala and moved to Berkeley, California when she was of school age. She has served on the boards of the League of American Orchestras (formerly American Symphony Orchestra League), Museum of Latin American Art, LA County Medical Center Auxiliary, Los Angeles Philharmonic Association, and Specialty Coffee Association of America. Currently she sits on the board of the Association of California Symphony Orchestras and on the Advisory Council for CARES, the support group for LA County Medical Center Auxiliary. Locally, Mireya was on Pasadena’s Senior Commission and is now active on the city’s Commission for the Status of Women. She is president of Dona Mireya, Inc. and Jones Coffee Roasters. Mireya also strives to make a difference in her home country of Guatemala, and spends as much time there as possible.

Lawrence (Larry) W. Jones, M.D. was born and raised in Ithaca, New York. He attended Berkeley High School, where he met his future wife Mireya. A graduate of Yale College, UC Berkeley, and UC Medical School at San Francisco (UCSF), Larry trained in Urological Surgery at LAC-USC Medical Center. He served three years as Chief of Urology at the 5th General Army Hospital in Stuttgart, Germany. After completing a research fellowship in tumor immunology at UCSF, he began practicing urology in Pasadena in 1974. Larry volunteered as a consultant and contributor to the Max Nitze Museum of Surgery in Stuttgart and helped develop and design Baltimore’s American Urological Association Museum. These experiences inspired his involvement in the design of the first-floor exhibition area of the new HMRI headquarters in Pasadena. Larry was awarded the coveted William P. Didusch Art and History Award for his work as Editor-in-Chief of the two-volume American Urological Association Centennial History, 1902-2002. In retirement, he now enjoys being a reader at The Huntington, the fellowship of the Pasadena Breakfast Forum, and treks in Guatemala’s Mayan ruins.

The couple has five children and thirteen grandchildren. Together they share a passion for the arts, travel, and coffee.

Jack & Lacreta Scott
Jack Alan Scott, PhD was born in Sweetwater, Texas and attended Abilene Christian University where he met his wife, Lacreta. He later earned his Master of Divinity from Yale University, as well as a PhD in American history from Claremont Graduate University. Jack is a distinguished American educator and former California politician. Currently a Scholar-in-Residence at Claremont Graduate University, Jack earlier served as President at Cypress College and Pasadena City College, was a member of the California State Assembly and California State Senate, and Chancellor of the California Community Colleges System. During his time in the Senate and the Assembly, Jack authored 146 bills that were signed into law. From the beginning, he was a champion of educational issues. His commitment to education is evident in the various prestigious honors he has received throughout his career including, but not limited to, Legislator of the Year by various educational organizations, and the National Leadership Award from the American Association of Community Colleges.

Lacreta Isbell Scott was born in Amarillo, Texas, and was valedictorian of her high school’s graduating class in Elk City, Oklahoma. She received her BA degree from Pepperdine University and MA degree in English from California State University, Long Beach. Lacreta was a Professor of English at Cerritos College for twenty years. She is familiar to many in the community as author of a monthly column for the Pasadena Star-News that ran for several years entitled “Life Lessons.”

The couple raised five children; they have eleven grandchildren.

Purchase a Ticket or Tribute Ad

Thank You to Our Event Sponsors

Reflects gifts received as of November 6, 2019

thank you to our generous auction donors

Purchase a Ticket or Tribute Ad